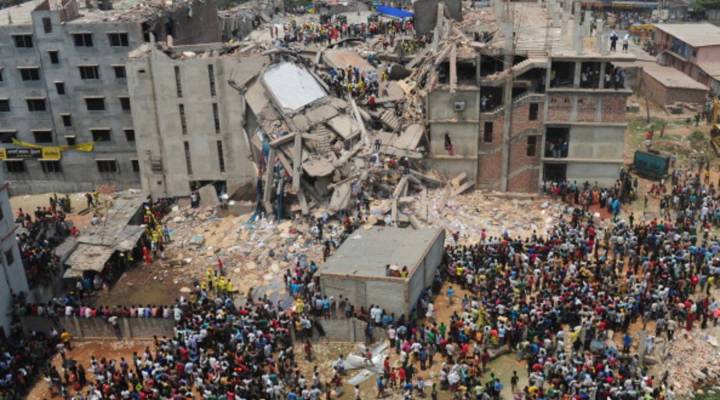 Plenty of finger-pointing, but little compensation in Bangladesh factory tragedies

COPY
Bangladeshi volunteers and rescue workers are pictured at the scene after an eight-story building collapsed in Savar, on the outskirts of Dhaka, on April 25, 2013. MUNIR UZ ZAMAN/AFP/Getty Images

Plenty of finger-pointing, but little compensation in Bangladesh factory tragedies

Bangladeshi volunteers and rescue workers are pictured at the scene after an eight-story building collapsed in Savar, on the outskirts of Dhaka, on April 25, 2013. MUNIR UZ ZAMAN/AFP/Getty Images
Listen Now

A “blame game,” is how Laura Gutierrez, a Fulbright fellow researching Bangladesh’s garment industry, describes the process of trying to assign responsibility for factory disasters.

Gutierrez, who spoke to Marketplace from the site of a massive building collapse in Dhaka that has killed at least 194 people, said finger-pointing is rife following such tragedies.

Some items of clothing found inside the collapsed building, which housed a number of factories, reportedly bear the labels of American and European companies.

“Assuming that American and European or other western brands were present here in the factory, it is their responsibility to pay compensation,” Gutierrez said.

However, compensation is often voluntary rather than mandatory, as companies, governments and factory owners point fingers over who bears ultimate responsibility.

After a fire tore through the Tazreen factory in Bangladesh late last year, killing at least 112, Walmart and Sears declined to compensate victims’ families. Each company said it was unaware its goods were being made in Tazreen. Walmart donated $1.6 million to launch the Environmental Health and Safety Academy in Bangladesh.

Burt Flickinger, managing director of the Strategic Resource Group, says it is worth keeping an eye on whether the fire has an impact on Walmart’s bottom line. He predicts a slight drop in sales of the company’s clothing.

“Consumers have a conscience and they support the stores much less where there have been tragic factory disasters and deaths and massive amounts of injuries,” Flickinger said.