We’re watching you: Surveillance cameras are a hot ticket item, after Boston

We’re watching you: Surveillance cameras are a hot ticket item, after Boston

The surveillance industry is huge. Just sales of cameras, recorders and other big brother equipment in the U.S. this year is expected to bring in $3.2 billion. And analysts say the market is growing, at a rate of six to eight percent a year. But like the events that security cameras are supposed to watch, the industry itself can be murky and hard to track.

We are used to big brother watching us. Security cameras at military bases, power stations, elevators. When bad things happen — we install more, right? Paul Everett, who works with industry analyst IHS, says that’s what took place after the London bombings in 2005.

“Camera systems being installed within trains and within buses to try to protect against future events that are happening.”

Often, says Everett, the reason behind a sale is a mystery.

Vance Kozik, who works with D-Link, a company that manufacturers security cameras, explains that when a city or business buys a camera, it’s not always related to recent events, sometimes, it’s just time for an upgrade.

“The trend now is to go towards high definition multi-megapixel IP cameras just because there’s so much more clarity in the video,” he says.

Kozik notes that D-Link has seen a spike in sales since the Boston Marathon bombing. And a representative of one major Manhattan retailer also said sales of surveillance equipment are strong, but because the store is worried about its own financial security he wouldn’t agree to publish the businesses’ name.

Over the last month, the search term “surveillance” has been on the rise, spiking significantly during the week of the Boston Marathon bombing. 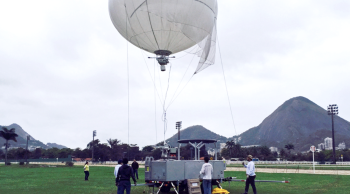