Other lobbyists look for lessons in NRA success

Other lobbyists look for lessons in NRA success

The National Rifle Association notched another victory this week with the defeat of gun control legislation in the Senate, burnishing its reputation as one of the most effective — if not the most effective — lobbying organizations around. Lobbyists for all sorts of other causes are looking at the NRA’s success and wondering how they might crib some of the secrets of its playbook.

Jim Thurber has taught a how-to lobbying course at American University for 30 years. The NRA is so good, Thurber says, he brings their chief lobbyist in to talk to students. Thurber says the NRA does have lots of money, but the real lesson here is how it organizes its members to pressure lawmakers.

“So they have at least 180,000 that are immediately reactive to anything that’s going on,” Thurber says. “Through the internet, they get mobilized and send a message.”

Toby Moffett knows some of the targets of those messages. He’s a former member of Congress, who now lobbies mostly on behalf of foreign countries. He says some House Democrats told him they were amazed at how their incoming emails suddenly turned against gun control, during the recent debate.

“Their mail had totally flipped,” he explains. “From 5-1 in favor of doing something, to 5-1 against doing something.  Now, that didn’t just happen by accident. That was the NRA.”

Even though Moffett is a gun control supporter, he appreciates the NRA’s lobbying prowess. He uses similar tactics to build citizen coalitions for his clients.

Steve Fox is also a lobbyist. He’s with the Marijuana Policy Project, which wants to change federal laws on pot. He tries to emulate the NRA’s ability to frame an issue in terms of fundamental rights.

Fox’s group has even tried to join forces with the NRA to overturn a law that prohibits marijuana users from owning guns. But so far, the NRA isn’t interested. 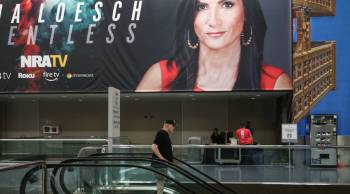