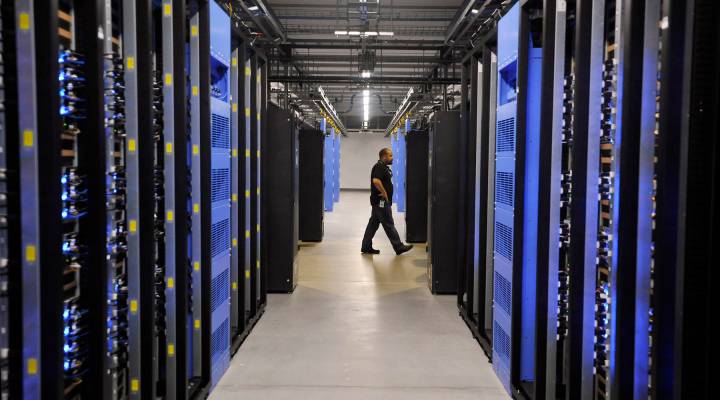 COPY
The data storage market is now worth about $70 billion a year. Rainier Ehrhardt/Getty Images

The data storage market is now worth about $70 billion a year. Rainier Ehrhardt/Getty Images
Listen Now

It seems like everything we do these days generates data for some company. Walk to the corner store with your phone? Your phone company gets your location data. Buy a Coke and a Snickers with your debit card? Your bank gets your purchase data. Go home and check your Facebook newsfeed? Call your mom? You guessed it, data, data, data.

We generate so much data every day that it’s beginning to cost companies dearly to store it, so they can improve their businesses and boost sales. That’s given rise to a host of digital storage companies, such as Switch.

Located outside of Las Vegas is Switch’s SuperNAP7, one of the largest server farms in the world. It’s the size of seven football fields, a warren of dimly lit aisles packed with blinking machines locked in cages. Companies like Google, TurboTax and Morgan Stanley store their data here.

“From this wall all the way to the back wall, so from here on down, this is all eBay,” Missy Young, who works for Switch, says during a tour of SuperNAP7.

Young says eBay spends billions of dollars storing all the date its auctions generate. The data storage market is worth $70 billion a year, according to data company EMC. Companies like Amazon and Dell have jumped into the business.

“The demand for storage is growing at an unprecedented rate,” says Dick Csaplar, senior research analyst for Aberdeen Group. In a report last year, Csaplar found companies are spending about 12 percent of their IT budget storing data and those needs are doubling every two years.

The cost of storing data became a major issue at social media start-up, SEMMX Inc. Chief Technology Officer Michael Hoey says the company was storing its data itself, but the cost of buying and maintaining the servers threatened to eat up half of the company’s IT budget.

“When you start to have hundreds of hard drives, one of them is always broken,” Hoey says. “So you wind up needing a full time person just to be there.”

Last year, SEMMX moved its data to a storage service run by Amazon. Renting that space isn’t cheap, and storage still accounts for about 15 percent of SEMMX’s IT budget.

Back at SuperNAP 7, Young says demand has been so strong that SuperNAPs 8 and 9 are already under construction. The amount of data being stored in these buildings is mind blowing. Young points out one cluster of servers, about the size of a dozen refrigerators.

“The entire written works of man, from the dawn of time until today, in every single language, is the equivalent of 50 petabytes of data,” she says. “Inside this one cage is a little over 100 petabytes.”

So, everything ever written, from Genesis to Twilight, could fit — twice over — in a cluster of machines in the corner of SuperNAP 7. Imagine, then, how much corporate and consumer data the building holds.