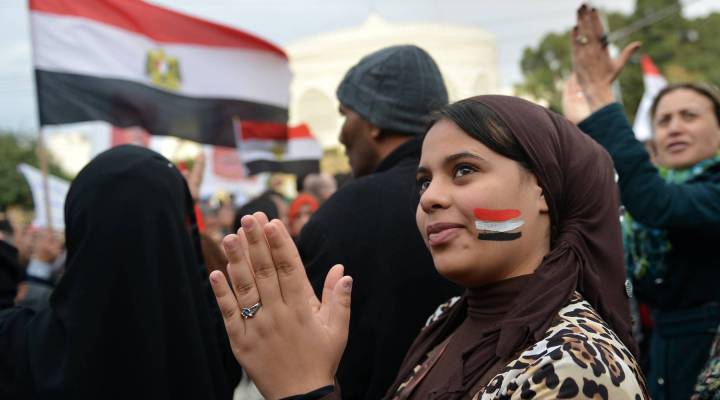 Egypt’s loan delay is about prices — and power

COPY
An Egyptian protester applauds during a demonstration in a show of opposition to Morsi and his Muslim Brotherhood in front of the Presidential palace in Cairo on February 1, 2013. KHALED DESOUKI/AFP/Getty Images

Egypt’s loan delay is about prices — and power

An Egyptian protester applauds during a demonstration in a show of opposition to Morsi and his Muslim Brotherhood in front of the Presidential palace in Cairo on February 1, 2013. KHALED DESOUKI/AFP/Getty Images
Listen Now

An IMF delegation is meeting in Cairo on today to negotiate the terms of a $4.8 billion loan. The Egyptian government signed a preliminary deal with the IMF in November of 2012, but the funds have been delayed by political turmoil and a reluctance by Egyptian authorities to submit to austerity measures, which are reported to include tax hikes and a reform of the country’s energy subsidies.

Egypt’s economy was badly shaken by the 2011 uprising that topled Hosni Mubarak. In the wake of the political instability that followed, foreign investment dried up and key industries like tourism and construction were dealt heavy blows.  The country’s foreign reserves have shrunk to critical levels, raising the prices of some imports and making others — like fuel — difficult to procure.

“Anywhere you go, you’ll see a queue to a petrol station at least half a mile long,” says Farah Halime, editor of the blog Rebel Economy.

Egyptian authorities say the country has enough in reserves to weather the most recent crisis, but fuel shortages, rolling blackouts and continued political unreast have frightened off investors and agitated millions of Egyptians who say that it is harder than ever to maintain their standards of living.

“The situation with respect to foreign reserves has apparently hit a more critical stage,” says Michael Wahid Hanna, senior fellow at The Century Foundation. “We’re reaching the point where the status quo is simply not sustainable.

The status quo includes a divisive and divided political arena which pits the government of President Mohammed Morsi against an often fractious opposition. Morsi’s reluctance to sign the loan is, analysts say, partially due to fears that austerity measures might provoke a backlash from millions of Egyptians living on or below the poverty line. With parliamentary elections scheduled for later this year and his popularity plummeting, the political stakes for Morsi may be higher than ever.