The Statue of Liberty Mutual

The Statue of Liberty Mutual

At her dusty Ford dealership in Kentucky, Pauline Wilkes makes a sales pitch while sipping her morning coffee.

But what really gets Wilkes’ engine running is a big change just down the road. Wilkes is a two-minute drive from the Abraham Lincoln Birthplace, home to the 16th president’s famous log cabin. In a few weeks, the sign marking that site will read “Ford Lincoln National Park.”

“It’s a way for us to support the national park,” she say, “and it’s good for business. People see that sign and they know that Ford supports our presidents, even if they’re dead.”

Commercial sponsorships at national landmarks are likely to become more common as the federal government attempts to squeeze revenue from wherever it can. The National Park Service has long sold concession rights so businesses can operate inside parks. Those licenses bring in some $60 million a year. Now the Park Service is going one step further by selling naming rights.

Some budget experts say the move could appeal to both parties.

“I think that conservatives support this 100 percent because to the extent that you allow the private sector into the government sector you improve its efficiency,” says Kevin Hassett, director of economic policy studies at the American Enterprise Institute. He adds that the sponsorship windfall will offset some of the across-the-board budget cuts mandated by the sequester.

“People are looking at billions of dollars in potential,” Hassett says. “I think pretty much every corner of government is going to have a name on it.”

The government won’t simply sell to the highest bidder. It wants to match monuments with sponsors whose names or logos are appropriate.

Another deal in the works is Johnson & Johnson’s $200 million bid to have Band-Aid sponsor the Wounded Knee Battlefield. The park service will formally announce the program today, April 1. 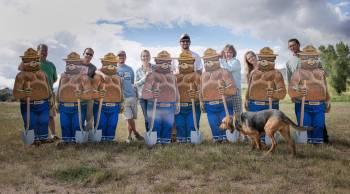