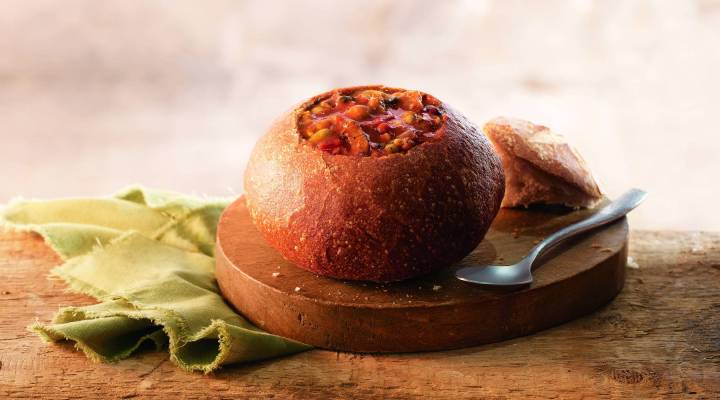 Panera Bread on Wednesday expanded its experiment in “pay what you want” pricing, allowing patrons at 48 locations in St. Louis to name their own price for a bowl of turkey chili. For the past three years, Panera has operated five “pay what you want” cafes around the country. Any profits after paying costs go to hunger relief charities. How has that business model worked so far?

The lunchtime crowd at a Panera in downtown St. Louis is a busy scene. And on a cold day, more than a few have opted for the turkey chili, for the bargain price of…whatever they want to pay.

The suggested price is just under $6. But Melissa Strohmeyer paid more.

Strohmeyer likes the idea that the extra money she paid is going to a good cause. And customers like her are not uncommon.  Kate Antonacci heads Panera’s Societal Impact Initiative.

Antonacci says the program more than pays for itself. But, if you’re thinking, “Yeah, just watch Panera try and pull this off with all the freeloaders in my neighborhood” — well, just hold on a second.

When I asked where on the spectrum between “marketing genius” and “completely crazy” this might fall, Selin Malkoc said it’s closer to the former. Malkoc is a professor of marketing at Washington University and said when Panera gives customers the choice to do the right thing, it’s engaging an important part of human behavioral psychology called “self-signaling.”

“So, you’re more likely to say, ‘I am the type of person who gives to charity, ‘so given that customers as people, we have that need, to the extent that as a company you can tap into it, it’s going to work,” Malkoc said.

She notes much of the research into the name-your-own-price model was done by U.C. San Diego researcher Ayelet Gneezy.

For now Panera isn’t planning to roll out “pay what you want” pricing at all its 1,600 cafes. It wants to see how the idea plays in St. Louis first.