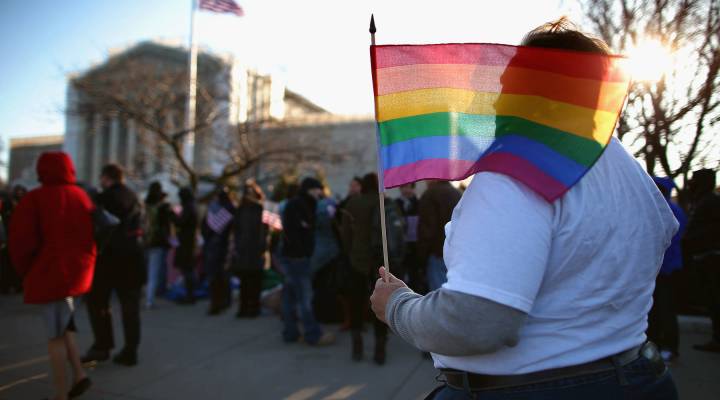 DOMA and the lesser-known benefits of gay marriage

DOMA and the lesser-known benefits of gay marriage

For the second day running, Supreme Court justices heard legal arguments about gay marriage. Today’s case – United States versus Windsor – was all about money. New Yorker Edith Windsor had to pay some $360,000 in estate tax after her wife died because the Defense of Marriage Act wouldn’t let the I.R.S. recognize their marriage.

“It’s called an unlimited marital deduction,” explains Dr. Stanley Veliotis, a lawyer and certified public accountant who teaches Accounting and Taxation at Fordham University. “If you and I are married and I have a $100 million estate, I’m allowed to leave it all to you and we pay no estate tax.”

At stake in this case is far more than a tax that only the wealthy have to pay. The verdict will determine whether gay couples are eligible for more than 1,000 federal programs and benefits. For instance, you can hand ownership of your house or other property over to your spouse, tax free.

Spouses of veterans get preferential treatment when applying for government jobs. Those married to police officers killed in the line of duty receive $100,000.

“Stuart and I have been together for 26 years,” Lewis says. “Twenty-six years of having the federal government tax us at a different rate because we cannot file jointly just because we’re gay.”

Lewis says his husband also pays an extra $2,000 a year to include him on his health insurance, and that money is taxed as income. “That adds up over time,” he says. “And that is money that we desperately need to save for our retirement.”

If the Supreme Court rules that the Defense of Marriage Act, or DOMA, is unconstitutional, federal benefits will still only be available to couples in the nine states (and District of Columbia) that have legalized gay marriage.

Economist Leslie Shafer says confusion over current laws has been a major expense in and of itself.

“We had the expense of hiring a lawyer that made sure that we wrote a lot of contracts to cover ourselves, because we don’t have the automatic benefits you get when you’re married as a heterosexual couple,” she says.

In addition to federal benefits, Shafer also hopes for savings on a smaller scale. “Depending on which rental car company you use, some of them treat us as spouses and some don’t, so you have to pay extra to have a second driver,” she says. “There’s tiny little things all the time.”