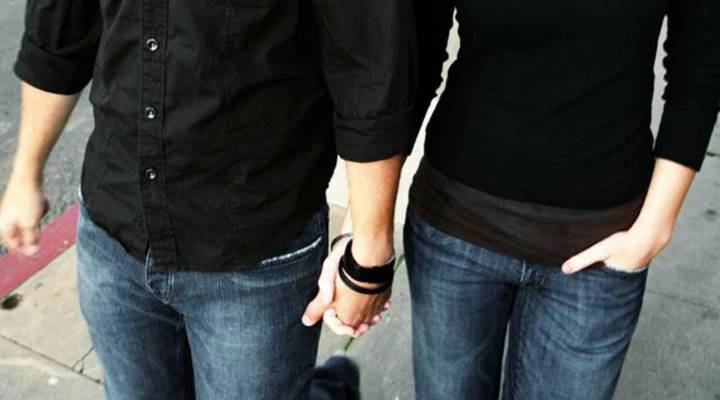 The heart, as we all know, wants what it wants. It also rarely wants the most practical thing, which is OK most of the time because on this program we talk a lot about practical things — like retirement savings, debt, and mortgages. Those are areas where a certain emotionless-ness can be helpful. And yet, not every financial decision is practical. Take settling down with someone forever. Marriage is — if you think about it — one of the most important financial decisions a lot of people make. And yet, most don’t think of it that way at all. A shocking number of people, in fact, go ahead and get married without ever talking about money with their beloved.

Jenette Sturges and her finance Julian Vargas are having their weekly household meeting. At the kitchen table every Friday, the two review their finances over a glass of wine. They started having these meetings shortly after they got engaged.

“We decided if we didn’t have these meetings on kind of a regular basis that everything falls apart and we get really angry at each other,” says Sturges.

“There will be murders,” adds Vargas.

Between their mortgage, their student loans and their credit cards, the two 28 year olds in Aurora, Ill., have more than $180,000 dollars of debt.

“I get a lot of anxiety over money. I stay up at night thinking about our student loans and things like that. My parents kind of argued over money a lot, so I never really wanted to do that,” says Sturges. “This kind of helps.”

Arguing over money is not unusual — it’s a top reason couples divorce. What is unusual? A couple talking about money before they get married.

“In our society, money is really a taboo subject — almost like sex,” says Dr. Terri Orbuch, a relationship expert and author. “But I think money is even more a taboo topic, so these days friends are talking about sex, but we rarely know how much our friends make. We don’t know even how much our parents make.”

Add the blinders of romance to the mix and you’ve got a recipe for NOT talking money. Even when passionate love wears off a bit — 12 to 18 months later, according to Orbuch — people have no idea how to broach the subject of money.

“So when we are now jointly financially responsible with someone else, we don’t have the vocabulary to talk to this other person about money,” says Orbuch.

Susan from the state of Washington didn’t talk about money with her finance. But after they married, she learned he was a closet spender who would constantly draining their bank account. When the couple was splitting up she says he, “racked up considerable debt in my name on wine women and song and he had a better lawyer.”

Susan got stuck with $30,000 of that debt, which she had to pay off while putting her kids through college.

“That’s a big source of resentment, let me tell you,” says Susan. “But in the end, it’s a good lesson.”

At 64, Susan’s been in a relationship with a financially stable partner for eight years. They live together, but Susan says she won’t get married again.

“No matter how much you love someone, it’s a risk to be responsible for their financial behavior. I don’t want to take that risk anymore,” she says. “I don’t think anybody should, frankly.”

Emily Grover, 25, wants to minimize that risk. At a popular singles bar near New York University, Grover says the way a man handles his money is very important to her.

“I’ve learned from past relationships and just from my own upbringing that having financial stability is something that’s really important to me in a relationship,” she says.

Grover says she tries to get a sense of someone’s financial responsibility early on.

“The beauty of online dating is that you can kind of filter out people from the get-go. So you can see if they have a college degree, if they have a post-graduate degree, and sometimes they even list what their income is,” say Grover.

Since the financial crash, many daters have gotten more financially picky. Several dating sites have cropped that cater to them, by requiring people to list their credit scores. Grover hasn’t gone that far yet, but she steers clear of free sites, which might attract the broke and indebted.

“It sounds so unromantic and horrible to say, but I’ve worked hard to get where I am and I’ve worked hard to not have credit card debt and to be paying off my student loans ahead of time and that’s something that I want to look for in another person,” says Grover.

That discomfort in factoring finances into the soul mate search is not uncommon, says family therapist Lair Torrent. He says his single clients often hesitate to bring up financial concerns about a significant other.

“Our popular culture puts it out there that it should be all puppy dogs and ice cream. So there’s this sheepishness about bringing up the money issue,” says Torrent.  “I’ll have people say, ‘I don’t want to sound like a gold-digger,’ I get that a lot.”

Jenette Sturges and Julian Vargas have overcome that. They hope their weekly meetings will ease them into the financial side of married life. Vargas says tackling their debt together has made them stronger as a couple.

“It gives us something to come together an attack as a team. Our debt becomes this exterior antagonist,” he says.

“He was an English major, that’s why he talks about exterior antagonists,” adds Sturges.

That exterior antagonist has taught Sturges a few things, too.

“I think I’ve learned to kind of relax a little bit more about it,” she says. “I try not to obsess about it.”

“That’s why we have a wine budget,” he says.

And a wedding budget. Vargas and Sturges opted for a 2.5 year engagement to be able to afford the wedding they wanted. Their attitude towards couples who don’t talk about money before they get to the altar?

“I guess all I can say is good luck,” says Vargas.