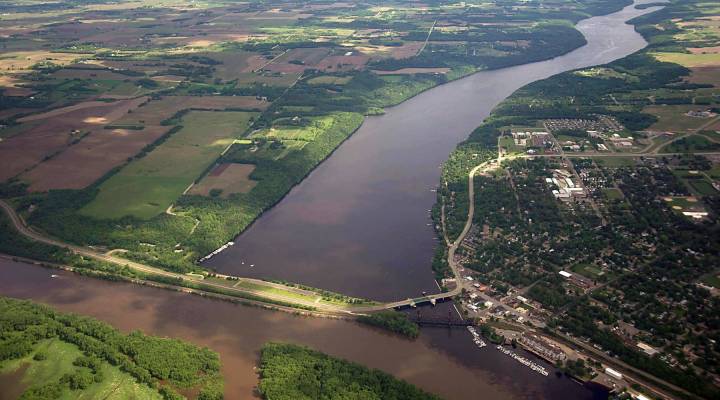 COPY
The confluence of the St. Croix (TOP) and Mississippi Rivers (BOTTOM) is seen from the air on May 31, 2012. KAREN BLEIER/AFP/GettyImages

The confluence of the St. Croix (TOP) and Mississippi Rivers (BOTTOM) is seen from the air on May 31, 2012. KAREN BLEIER/AFP/GettyImages
Listen Now

Over the past couple  years, the Mississippi River has been beset by floods and droughts, costing hundreds of millions of dollars. This week a group of 11 mayors along the river launched a lobbying push to focus Washington’s attention on a system-wide plan to protect commerce and manage natural disasters along the waterway.

Atop the group’s list of concerns is more funding for infrastructure like locks and dams to maintain navigation on the river.

“This is about one of our biggest and most important economic assets in the entire nation, and that’s the Mississippi River,” says Slay. “We have over 100 million tons of cargo that move past the [Gateway] Arch every year.”

Slay says many of the locks and dams on the river are upwards of 100 years old, needing as much as $60 billion in deferred maintenance.

But not everyone is convinced action is needed. Don Sweeney,a transportation economist at the University of Missouri-St. Louis, says the locks and dams are working just fine, and are actually seeing fewer barges.

“On the Mississippi River, from its peak heydays in the 1990’s and late 1980’s, traffic is down some 30 to 40 percent,” says Sweeney. “Rail has become much more competitive.”

The mayors plan to work closely with a newly-formed Mississippi River caucus in Congress to advance their goals.