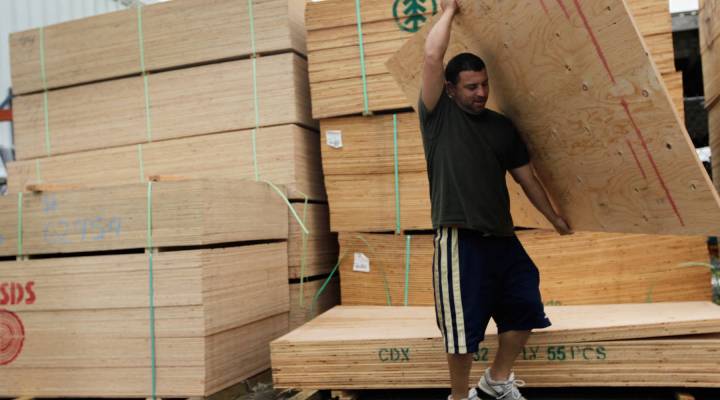 Downside of a housing rebound? The price of plywood on the rise

COPY
Thanks to improvements in the hosuing market, demand for plywood and other lumber products is growing. But suppliers haven't been able to keep up with demand, so prices are unusaully high. Joe Raedle/Getty Images

Downside of a housing rebound? The price of plywood on the rise

Thanks to improvements in the hosuing market, demand for plywood and other lumber products is growing. But suppliers haven't been able to keep up with demand, so prices are unusaully high. Joe Raedle/Getty Images
Listen Now

It was a good week for the housing market. We learned nearly two million homeowners moved from being underwater on their mortgages to positive equity. And construction of new homes hit a four-year high.

That’s good news for construction workers and providers of building materials.  Today one of those providers, Georgia-Pacific, announced it was spending $400 million to ramp up capacity to meet growing demand for plywood and other lumber products. But in the meantime, prices for those materials are likely to stay high.

“The plywood prices have shot up every day, I mean, they’re rising all the time,” says Bob Brown is a manager at Beyers Lumberyard in St. Louis, where forklifts are zipping back and forth, an early sign of what is shaping up to be a busy building season.

You’d think after the cold dark winter of the construction industry’s discontent, the news that housing is back would put a smile on his face. But then he calls his lumber supplier.

“Every time we call prices are higher.”

Costs for raw materials like two-by-fours and plywood are sky high right now. The main reason is that supplies of plywood are unusually low.

“The issue is that inventory are extremely low because everything that is being produced is being consumed right away,” says Greg Lewis, who tracks wood panel supplies for Forest Economic Advisors. “People in the market are scrambling to find the panel and lumber that they need.”

A year ago, the composite price for wood panels was just over $350 per thousand square feet. Today it’s more than $500. That’s according to Radom Lengths, a trade publication for the wood products industry. Jon Anderson is the publisher.

“The industry reduced its output dramatically when the housing market crashed,” Anderson says. “This happened like never before.”

Mark Luetters heads the building products division at Georgia-Pacific. He says his company scaled back production by 30 to 40 percent after the housing collapse. And it’s going to take some time to get back up to speed.

“The products we’re talking about right now will probably take 18 months to two years to put into place,” says Luetters.

As long as domestic supplies remain tight, retailers and wholesalers have little choice but to import or keep prices high.