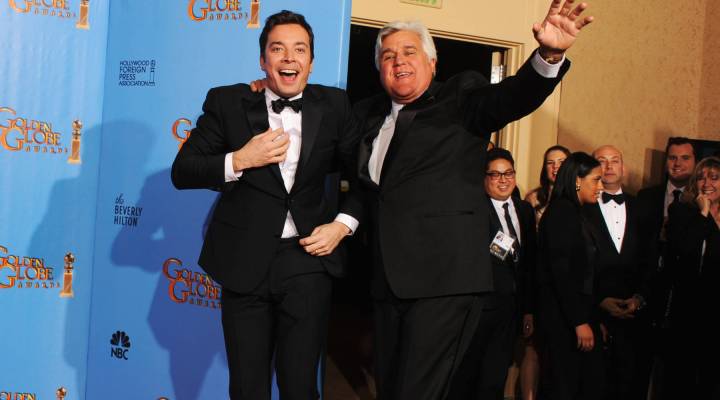 Why NBC may tap Fallon to succeed Leno

COPY
Jimmy Fallon and Jay Leno pose together in the press room at the 2013 Golden Globe Awards. Fallon is said to have been chosen to take over as 'The Tonight Show' host when Leno steps down. Kevin Winter/Getty Images

Why NBC may tap Fallon to succeed Leno

Jimmy Fallon and Jay Leno pose together in the press room at the 2013 Golden Globe Awards. Fallon is said to have been chosen to take over as 'The Tonight Show' host when Leno steps down. Kevin Winter/Getty Images
Listen Now

Reports are swirling about the future of NBC’s Tonight Show. Jimmy Fallon is said to have been chosen to eventually succeed Jay Leno, who has hosted the show since 1992 — well mostly. There was that Conan O’Brien interlude.

Leno and Fallon both have strong TV ratings, though certainly different comedy styles. There’s another difference that points to why Fallon might be a smart choice for TV’s longest-running late-night comedy show. It’s called Twitter.

The Tonight Show still pulls in a big TV audiences: more than three million viewers a night. Those eyeballs are what advertisers care about, but that’s changing, says Bill Carroll, with Katz Television Group, which sells TV advertising.

“Social media is becoming part of the overall equation,” he says. “Advertisers are starting to pay attention.”

Yesterday, Nielsen released a report that found Twitter has a major impact on TV ratings. That’s good news for NBC and Fallon. He has some eight million Twitter followers. Leno has just half a million.

“The social audience is a much more loyal, engaged audience. They want to be there to participate during the show and interact with Jimmy Fallon and the other fans of Jimmy Fallon,” he says.

That kind of audience enthusiasm is catnip for networks and advertisers. Ward notes that when Charlie Sheen quit the hit show Two And A Half Men, it was no coincidence that his replacement, Ashton Kutcher, had more than six million Twitter followers.

“That was one of the reasons he was cast for that show. He could bring an audience over and the social buzz around that,” he says.

In the future, the audience that determines TV ad rates could include a show’s Twitter followers and YouTube viewers. YouTube clips are another strength of Fallon’s. A “Mom Dance” he performed with First Lady Michelle Obama on his show last month has gotten more than 15 million YouTube hits. A rap Fallon did with Justin Timberlake last week already has nearly two million views.

YouTube views aren’t brining NBC any money just yet, but finding the right host for the Tonight Show is all about the future of media.

“It’s a longterm decision,” says Brad Adgate, senior vice president of research at Horizon Media. “Leno has sat at that desk for 20 years, so you have to look five to 10 years down the road at how are people going to be consuming content, particularly younger ones.” Adgate says the audience for video clips will become more and more important.

In other words, the future of the Tonight Show will include what people watch tomorrow morning.