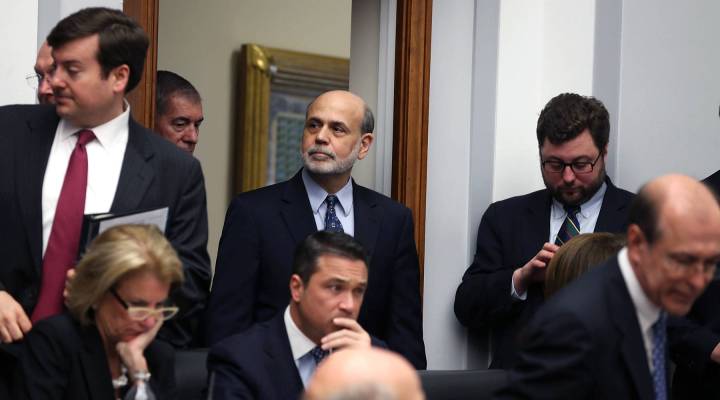 The Federal Reserve has been buying up securities to boost lending and spending for nearly five years now, injecting $1.6 trillion into the economy and probably $2 trillion when all is said and done. One of the potential problems with pumping so much money into the economy is of course inflation, but there are other risks.

“One of the trickiest things right now is [that] companies have shifted a significant amount of their financing to the debt market away from the equity market” says Chris Low, chief economist with FTN Financial Group.

With interest rates so low and so much liquidity available in the system — all products of quantitative easing — companies are borrowing more.

“That’s dangerous,” Low explains, because interest rates won’t stay low forever. “At some point, they’re going to have to pay higher rates to borrow and they will have significantly more exposure.”

“If you look at the number of continuing claims for unemployment insurance — therefore the number of people still unemployed — that is still at an extraordinarily high level,” he says.

In a speech on March 4, Federal Reserve Vice Chair Janet Yellen elaborated on a number of other indicators the Federal has so far found to be unsatisfactory: The unemployment rate, payroll employment growth rate, the hiring rate, and the “quit rate” — how readily people quit their jobs (people don’t quit if they are super worried about finding a new job).

As interested as investors are in the Federal Reserve’s decision on quantitative easing, they will also be looking for some indication of a time table for easing out the easing. When quantitative easing stops, interest rates are expected to rise by “about a half percent” according to Chris Low of FTN, something people want to be able to anticipate.

Also hello, remember Cyprus? Some economists say the prospect of more crisis in Europe is just another reason for the Federal Reserve to keep its foot on the gas pedal…at least for now.