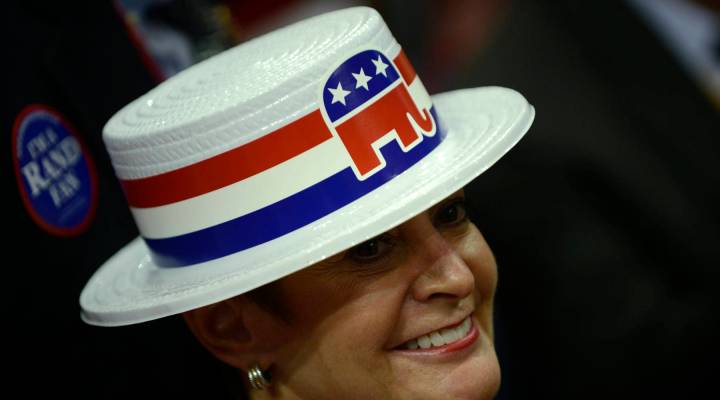 COPY
A lady sports a hat with the Republican elephant symbol on August 29, 2012, during the Republican National Convention (RNC). As the GOP tries to rebrand itself, we look at what happens when other brands have tried to reformulate their images. Click through... BRENDAN SMIALOWSKI/AFP/GettyImages

A lady sports a hat with the Republican elephant symbol on August 29, 2012, during the Republican National Convention (RNC). As the GOP tries to rebrand itself, we look at what happens when other brands have tried to reformulate their images. Click through... BRENDAN SMIALOWSKI/AFP/GettyImages
Listen Now

Today the Republican Party released a Growth and Opportunity Project Report, saying that the GOP needs to rebrand itself. The report said the party must expand its market appeal to young people, minorities and women. It cited its own focus groups, in which people described the Republican Party as “scary” and “narrow minded.” That 100-page report today reads, in some ways, like a corporate manifesto, full of marketing lingo and customer data about a multi-billion-dollar enterprise.

What does it take to rebrand? First and foremost, says brand strategist Adam Hanft, “Never let people know that you’ve decided to rebrand.” As far as the GOP’s image overhaul is concerned, that ship has sailed.

Second, it can’t be just skin deep. “Rebranding is not just a superficial layer, it has to go deep into the way a company operates,” Hanft says. He points out that Oldsmobile had one of the most iconic ad campaigns of all time — “This is not your father’s Oldsmobile” — but the catchy slogan couldn’t save the car line. “It was a clever way to rebrand, but the product never lived up to it,” says Hanft.

One company that did it right is Nintendo, says Ira Kalb, a professor of marketing at USC’s Marshall School of Business. Nintendo had ruled the video game roost, but started losing market share to Sony’s PlayStation and Microsoft’s Xbox.

“Nintendo kind of lost their position in the marketplace,” says Kalb, “so they decided to come up with a completely type of a game and they came out with Nintendo Wii.” Suddenly Nintendo had a new niche: It made video games that everyone could understand and use, and it promoted fitness.

Still, there’s a danger in rebranding, says consultant Debra Kaye, author of “Red Thread Thinking: Weaving Together Connections for Brilliant Ideas and Profitable Innovation.” Kaye has worked with companies like McDonald’s, Apple and Nissan. “If there’s something really loved and classic, they don’t want to throw out the baby with the bathwater,” she warns.

Case in point: The New Coke debacle of the mid-1980s when, Kaye says, Coke overlooked its real strength. “Coke represents deep American values, it’s everything we grew up with. So when they put New Coke out there, they were saying this is better.”

Kaye says a successful rebranding requires buy-in at all levels: employees, management, investors. And consensus could be a tricky formula for any political party.