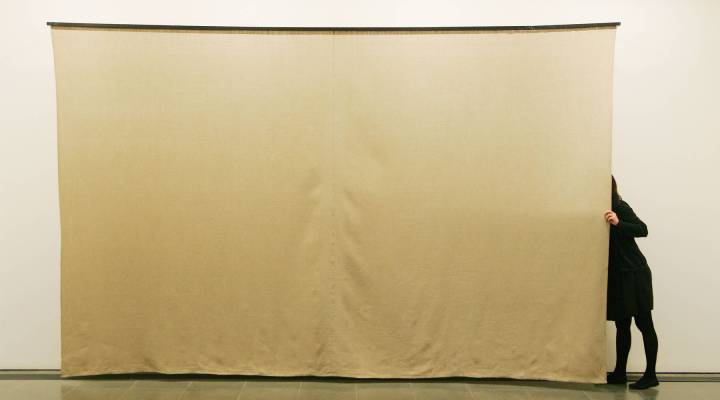 COPY
A woman stands next to a work of art entitled 'Historic Photographs.' Manhattan's Chelsea neighborhood has long been a hub for art galleries. But now tech and other companies are moving in -- and rents are becoming unaffordable for the arts. Geoff Caddick/AFP/Getty Images

A woman stands next to a work of art entitled 'Historic Photographs.' Manhattan's Chelsea neighborhood has long been a hub for art galleries. But now tech and other companies are moving in -- and rents are becoming unaffordable for the arts. Geoff Caddick/AFP/Getty Images
Listen Now

On a recent chilly afternoon in New York, a healthy crowd is strolling along The High Line in Chelsea, a park built on an old elevated rail line.

“It’s just such a nice walk,” says tourist Helen Crestwell. “I love all the artwork, what they’ve done with the gardens.”

The High Line is dotted with sculptures and murals, which echo Chelsea’s vibrant art gallery scene at street level. Those galleries helped transform Chelsea, on Manhattan’s west side, into a desirable neighborhood.

Seedy but affordable. Since then though, Siegel says rents have gone up 10-fold and many galleries are now being pushed out. Galleries like Schroeder Romero, which just closed its doors. Owner Sara Jo Romero remembers the feeling of unity among gallery owners when she opened the gallery with Lisa Schroeder in 2006.

“We all thought it would be wonderful to all kind of band together and be on one block together,” Romero says.

It was wonderful. And when the High Line opened in 2009, the galleries thought it would be a boon, says Lisa Schroeder.

“We were really excited. The whole neighborhood started to change because of The High Line, and we thought we were going to be part of that revitalization,” she recalls. “It turned out that didn’t happen for a lot of us middle-tier galleries. We just became priced out.”

Their rent doubled, and it didn’t help that galleries found themselves competing for space with New York’s booming tech scene. Stuart Seigel says that really took off after Google bought a building in Chelsea two years ago.

“The Google effect has had an enormous impact on the market in Chelsea. There are thousands of companies that want to be near Google,” he says.

As for the art scene, some galleries are migrating again — this time to Manhattan’s Lower East Side.