Despite market euphoria today, one could quibble about the Dow closing at an all-time high. The index isn’t inflation-adjusted. It’s just 30 big companies. So as economic indicators go, the 117-year-old index has its problems.

Turn your gaze away from the skyward green arrow on Dow graphics and you see a broader economy that’s a rather mixed bag for ordinary Americans. The positive news of rising home prices mingles with a murky job picture and payroll tax hike.

“Put it together and you have an economy that’s still moving forward,” says Mesirow Financial chief economist Diane Swonk. “But it certainly isn’t booming, and the Dow would leave you feeling as if everything’s booming.”

She adds that much of the corporate profit fueling stock surges is not from strong sales or overall economic strength, but company’s slashing budgets. The stock markets are also up because the Fed has been flooding the economy with cheap money.

Even if the much-hyped Dow ultimately presents a rather limited picture, it can have a psychological impact. The wealth effect is the economic concept that when share prices go up, people will spend more because they feel richer. When the Dow smashes through a barrier, it could open wealthy wallets a little wider.

“There is an impact, there’s no question about it,” says Wichita State University economics professor William Miles, who researches the wealth effect.

Miles adds that it’s felt strongest among high earners, those who tend to have more wealth in stocks. It’s worth nothing that not all economists believe the wealth effect has a major impact.

One place where Dow milestones absolutely always have an impact is CNBC. Broken records are heralded with extensive coverage and flashy graphics. The network plans ahead for big Dow days, even if it can’t predict them.

“We’re always preparing,” says Nik Deogun, the network’s senior vice president and editor-in-chief of business news. “Obviously, the days you prepare for it usually aren’t the days it happens.”

When it does happen, like Tuesday, he says it gets “adrenaline and energy” flowing on set and in the newsroom.

“People know that they’re playing on a big stage and they wanna do the best job possible at moments when there are more people watching,” Deogun says.

There’s a lot the Dow doesn’t tell us about the broader economy. But it does put on a good show. 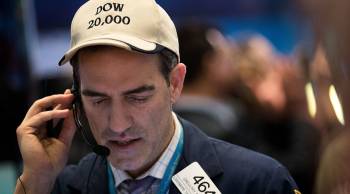