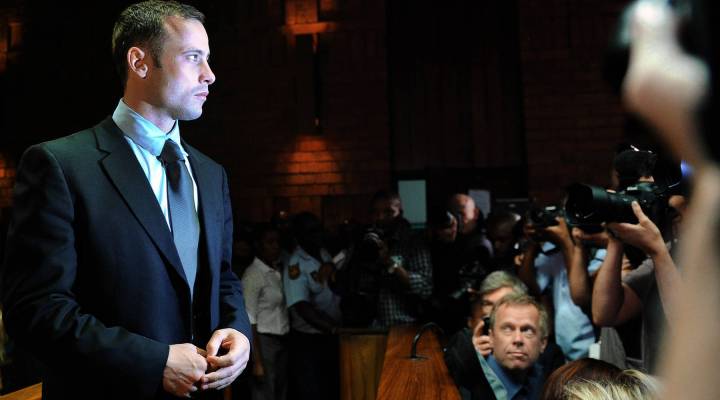 Entertainment analyst Robert Galinsky says another O.J. trial might be a stretch, but the Oscar Pistorius story is almost tailor-made for the media.

“Here comes a real-life hero,” says Galinsky. “This guy who has overcome being a double amputee, he’s created a success story for himself by being an Olympian, and something major like this happens, it’s a bonanza for the media.”

News networks have gotten very skilled at making stories like these — whether they be natural disasters, celebrity scandals or shootings — into mega-news events, says Aram Sinnreich, a media professor at Rutgers University.

“These stories all have this kind of car crash quality to them,” says Sinnreich. “Like, you don’t want to look, but you can’t look away.” That translates into big ratings and ad dollars. Sinnreich cites the recent story about the stranded Carnival Cruise ship. “CNN actually saw a 74 percent ratings boost during their several day coverage,” he says.

Those ratings bumps have now been baked into the business model of 24-hour cable news, says Robert Thompson, a professor of TV and popular culture at Syracuse University. Thompson says networks learned how to make a news event into a media blitz during the murder trial of another famous athlete: O.J. Simpson.

“Many people point to that as the real moment when we reached maturity for this kind of coverage,” says Thompson. “These kinds of stories, in effect, become cottage industries.”

Thompson points out that O.J.’s trial meant months of gavel-to-gavel coverage — lawyers and witnesses became mini-celebrities and news stories themselves. Thompson says you just can’t get that kind of mileage out the Greek debt crisis or the dreaded sequester.