Flightaware, an aviation industry website, says the number of flights cancelled in the United States because of the massive East Coast snow storm is near 5,000 — and could go higher. That means changed plans and possible airport sleep-overs for thousands of passengers who’ve been inconvenienced.

But it’s not just about passengers. Sara Keagle is a flight attendant based in Houston, and also blogs about the professionn at the TheFlyingPinto.

“For the most part, if you’re just sitting there without being on the aircraft and the door closed, then you’re not getting paid,” said Keagle. “However, if your flight cancels, then you could be in luck and you could be pay-protected.”

“The worst scenario is just the same as the passengers,” she added. “Being stuck on board with the door closed and not enough amenities for everybody. You know, luckily there’s been some laws put into place to protect the passengers, which also protects us. We don’t really want to be stuck on there either.” 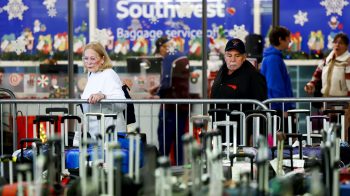