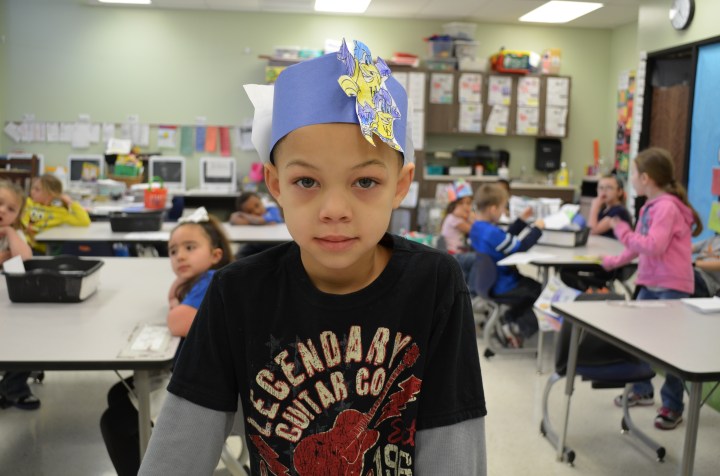 There’s a parade of cute coming down the hallway — a gaggle of first graders, walking single file, each one wearing a construction paper crown with a Penn State or University of Delaware logo.

The procession passes a classroom door decked out with the Seton Hall mascot. “Pirates!” the kids shout.

Today, every door at Oyler has been decorated to represent a college or university. The kids walk past the University of Georgia, Auburn and Cincinnati State. These 6- and 7-year-olds are still learning to read. So they practice.

“Start here, and go down,” teacher Michelle Reiring instructs them, pointing to a sign for the University of Missouri.

Then they come to another door, with letters cut out from magazines, like a ransom note. Seven-year-old Mark Tobin slowly sounds out the words.

“Did you know college graduates make almost twice as much money as people who don’t have a degree?” he manages.

“How cool is that?” Reiring says.

And that’s pretty much the point of this day — to get kids from preschool to 12th grade talking and thinking about college. “When I came to Oyler, there was, like, this complete absence of college,” says Oyler’s principal Craig Hockenberry. “Nobody even knew what a college was.”

When Hockenberry took the job 12 years ago, Oyler only went through eighth grade. Without a high school in their neighborhood, most kids eventually dropped out. So Oyler added a high school, and Hockenberry set about building a college-going culture at the school — almost from scratch.

Most Oyler parents never finished high school, let alone went to college, Hockenberry says. “It’s not a dinner table topic,” he says. “There’s a lot of absence of conversation with parents about that.”

Once a year, Oyler devotes a day to having that conversation. Teachers and staff wear college gear. There’s a recruiting fair in the gym. And every class spends an hour talking about college.

Teacher Joe Saylor shows his class of fifth graders the website for Hocking College, a small public school in Ohio. A recent Oyler graduate goes there.

“This is direct evidence that if you graduate high school from Oyler, you can go to college,” he tells them. “You can succeed.”

Saylor says that’s a message kids from Oyler need to hear long before sophomore or junior year. “You have to plant that seed early,” he says. “The sad truth is, not only are they not hearing it at home, they may be hearing the opposite at home: ‘You’re not going to go to college. You’re no better than me.’”

Saylor knows. He grew up a block away from the school. He also knows college isn’t for everyone. This year Oyler’s added trades into the mix, like plumbing and auto detailing.

At the recruiting fair in the gym, senior Richard Carter checks out an apprentice program in construction. He could start making around $15 an hour right out of school, while taking some classes.

“I wanted to actually do something hands on, where they pay me so I don’t have to pay them that much,” he says.

The real mission of this day is to encourage kids to set their sights beyond high school. Joe Saylor’s fifth graders seem to be getting the message. Their guest speaker, Chip Murdock arrives. He’s an admissions rep from Wilmington College.

“How many of you guys want to go to college some day?” he asks.

All of them raise their hands.