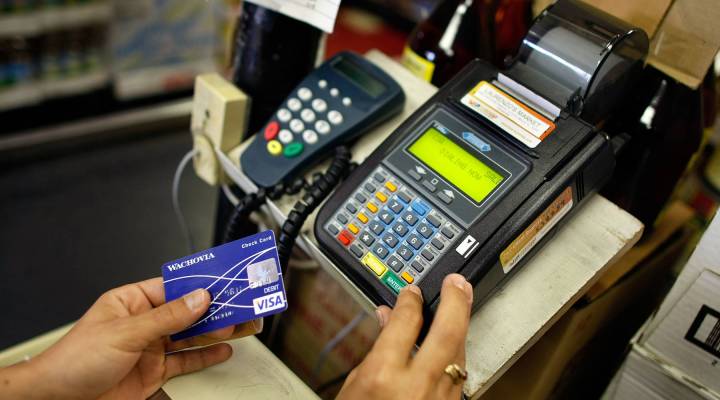 COPY
A woman uses a credit card reader to charge a credit card from a customer for payment at Lorenzo's Italian Market in Miami, Fla.  Joe Raedle/Getty Images

A woman uses a credit card reader to charge a credit card from a customer for payment at Lorenzo's Italian Market in Miami, Fla.  Joe Raedle/Getty Images
Listen Now

Credit card swipe fees are usually between 1-4 percent of the price of what you buy.  They do add up, to more than $30 billion a year. Merchants have long said the fees eat away already thin profit margins and, now, we may get the chance to feel their pain. The change is part of a $7 billion settlement card companies made with merchants last year.

Linda Sherry is the director of National Priorities at Consumer Action, a nonprofit consumer advocacy group. “Unfortunately, you could start seeing a new retailer surcharge, which we’re calling a checkout fee, when you use your credit card to buy goods and services,” she says. Sherry says shoppers can be on the lookout for a notice at the entrance of the store about the new fee. Shoppers will also be told about the fee at the cash register.

“A merchant can say to a customer, if you use debit, cash or check, you’re going to pay less than with this credit card. It helps me out and it will help you out,” says Sherry. Still most of us probably won’t see the new fee predicts Jeff Leonard, spokesman for the National Association of Convenience Stores. “Even with all the noise about surcharging, I don’t think you’ll see surcharging anytime soon,” he says.

Leonard points out that 10 states have laws in place that ban the fee, including New York, California, Texas and Florida. Stores are also worried about consumer backlash associated with the fees.

Get ready for new credit card fees — or not Retailers can now openly charge shoppers more for using credit cards. In fact, they’ve stealthily been passing those 1 to 4 percent fees on to consumers.

Even if the new fees aren’t passed on, retailers may ask customers to pay in a way that’s cheaper for the store, says retail consultant Michael Sansolo. “Everybody’s card is not created equal to everybody else’s card,” he says. Sansolo explains rewards cards carry higher fees for merchants; credit cards cost merchants more than debit cards; and debit cards have a have two-tier fee system depending on whether you type in your PIN or sign. “Retailers could make the point with the shopper that if you’re using a debit card, and you do the signature, it might be a 2 percnet or 3 percent charge,” says Sansolo, “because there’s risk associated with that, but if you do it with your PIN, maybe there’s no charge or a lesser charge.”

Sansolo says once consumers have more information about the fees associated with credit cards, they may choose to use debit instead of credit, or even cash. “Ultimately,” he says, “it could change the way we pay.”