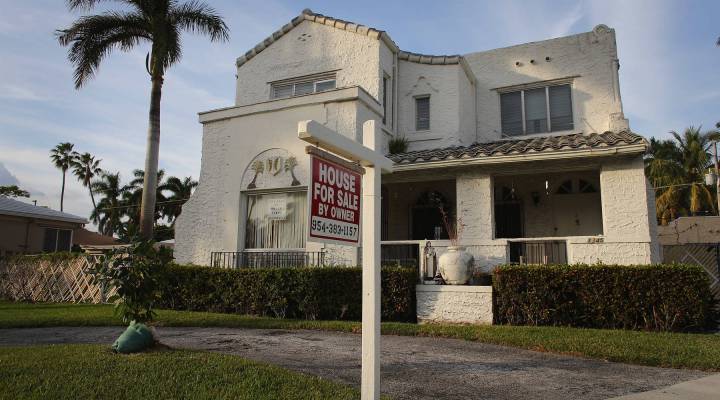 Can I sell my house? Depends on who you ask

A 'For Sale' sign is posted in front of a house in Hollywood, Fla. Joe Raedle/Getty Images
Marketplace Whiteboard®

Can I sell my house? Depends on who you ask

A 'For Sale' sign is posted in front of a house in Hollywood, Fla. Joe Raedle/Getty Images

Today’s new home sales numbers look mixed. They’re up nearly nine percent compared to a year ago, but down more than seven percent compared to November. But they come on the heels of some very positive data running across the housing market: this week, the Federal Housing Financial Authority said home prices rose in October, up 0.6 percent from September, and up 5.6 percent year-on-year.

The number of homes on the market (‘inventory’ in realtor-speak) perked up a bit: there were 151,000 units for sale nationwide in December, which is up from last month, but still down from a year ago. And the number of existing homes on the market is down to its lowest level since 2001. Fewer pre-owned homes? Well, builders are responding by throwing up new homes at a rate not seen since 2008: construction of new homes was up 12.1 percent in December from the previous month.

But if you ask around the country, you’ll hear marked differences in sentiment about the recovery in housing, depending on which market you’re in. Highly desirable neighborhoods with outstanding schools in the South and Midwest are experiencing soaring prices, while other neighborhoods, particularly in the Northeast, are languishing. So is the national housing market really recovering? And how sustained is the recovery?

Glenn Kelman is CEO of Redfin. It’s a real estate and technology company that’s been tracking housing trends for almost a decade now. We’ve interviewed him several times on our weekend personal finance show, Marketplace Money, and he’s on the show this week answering listener questions. He says the housing recovery is real, that banks have shifted from foreclosure to short sale and loan modifications, and that has taken care of much of the unsold home overhang that was holding the market back. Low interest rates are also helping: people who qualify for loans are getting them at historically low rates, and that’s putting more people into the market and juicing the recovery even more.

And yet the market is still not on fire. Here’s some acute analysis from Nick Timiraos of the Wall Street Journal that encapsulates what many real estate experts are saying about the market right now:

…listings are down because sellers are reluctant to sell at deep discounts to what their homes were once worth, particularly in light of the prospect that their home could be worth more if they wait.

Supply shortages are most acute in Western markets where many homeowners sustained such large price declines that they don’t have enough equity to sell without asking their lender to approve a short sale, where the home is sold for less than the amount owed. Others have equity, but not enough to make a down payment and cover moving and other costs associated with a transaction.

So, can I sell my house now? Yes. Assuming you’re not underwater, in which case you might want to wait for a while as the market continues to rise beneath you.  But can you buy a house now? Well, that all depends on, as your realtor might tell you, your chosen location, location, location.