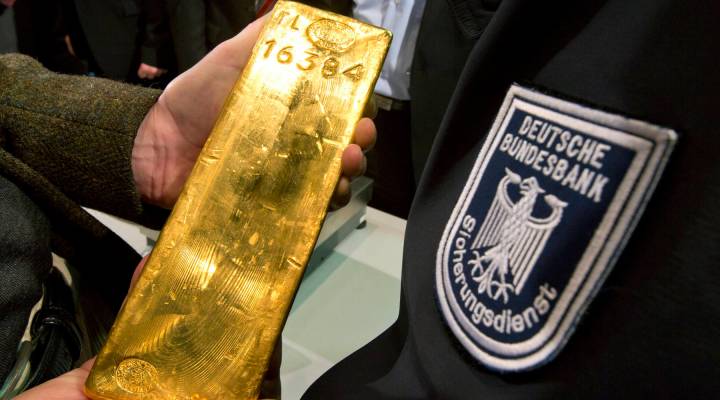 A journalist holds a bar of gold during a press conference at the German Federal Bank in Frankfurt am Main, western Germany. FRANK RUMPENHORST/AFP/Getty Images
Marketplace Whiteboard®

A journalist holds a bar of gold during a press conference at the German Federal Bank in Frankfurt am Main, western Germany. FRANK RUMPENHORST/AFP/Getty Images

Back in the days of the Soviets and worries about a Red Army invasion west of the Iron Curtain, Germany made a decision to hide the family jewels outside German borders. Well, the family gold, anyhow.

Germany has the second largest reserve of gold in the world — after the U.S. — but for years it has stored most of it in vaults in New York, France and London, rather than at home.

But the Soviet Union doesn’t exist anymore. Why’s the gold still there?

Germany’s version of the Federal Reserve, the Bundesbank, says it wanted to keep gold in overseas money centers so that if it needs to buy foreign currency, it has immediate access to collateral.

Where did the gold come from?

Quite simply, from German taxes. Germany didn’t have any gold in reserve until 1951. The Bundesbank says it first bought gold in October of that year, paying 2.5 million deutschmarks for 529 kilograms.

How much gold are we talking about here?

So what’s Germany doing with the gold now?

The announcement follows a government audit, which ruled that oversight of the reserves by the Bundesbank wasn’t rigorous enough. The audit said the Bundesbank has never actually verified the holdings in a proper inspection. The decision also comes on the heels of a heated internal debate in Germany about whether its gold is safe in other countries and should be moved home in case of domestic or international strife.

A Bundesbank spokesman acknowledged this in in interview with Forbes, saying the relocation “is in case of a currency crisis.”

The French might take the move as a snub, but the fact is, they hold the same currency as Germany, the euro, so there’s no real upside to holding gold in a Paris bank. As you read earlier, the Bundesbank said it wants to hold gold in New York and London — and will continue to do so — so that it can use it as collateral for dollars and pounds sterling, if needed.

How will they get the gold back to Germany?

They can truck it back from Paris, but the getting 300 tons of gold back from New York is fodder for movie scripts. Forbes says the gold will have to be flown back to Germany, probably in 3- or 5-ton shipments, as that’s the maximum that insurance companies will cover.

Isn’t that risky? Are thieves planning a heist?

Germany has done this before. The Bundesbank shipped about 850 tons of gold from London to Frankfurt between 1998 and 2001. But this is a big chunk of gold to move in a short time. It’ll take between 60 and 100 flights to transport the gold. And this at a time when thieves in Germany are getting quite innovative. Robbers in Berlin recently dug into a Berlin safe deposit vault via a 100-foot tunnel, and got away clean.