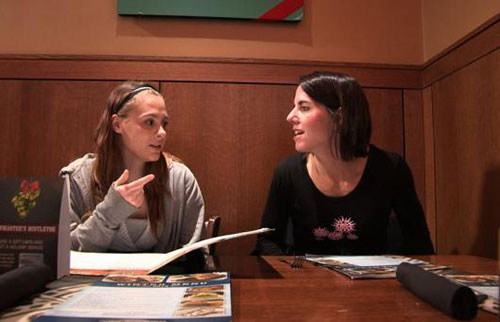 COPY
Raven Gribbins, left, gets a lesson in doing lunch from mentor Holly Gundrum at the Rock Bottom Brewery in Cincinnati, Ohio. Amy Scott
One School, One Year

Every Wednesday the seniors at Oyler meet for a lesson in life skills. Today’s guest, Quiera Levy-Smith, is smartly dressed in a suit and artsy glasses. She goes by the name Q.

“I’m here to talk a little bit about etiquette — specifically business etiquette,” she starts out. “Can anybody tell me what they think etiquette means?”

The following week the students will go out for lunch at a nice restaurant downtown. So today they go over what to wear. No jeans. Low heels. Hats off, boys. They talk about what to order. Nothing too messy or expensive. For some of these seniors, it’ll be the first time they’ve ordered from a menu or confronted a salad fork.

Q lays out a place setting on the teacher’s desk. “I did not, you know, come out of the womb knowing how to eat at a business lunch,” she tells the students. “If you make a mistake, stuff happens.”

To illustrate, she lets a knife clatter to the floor. “Do not panic. You’re at a restaurant. They have lots of knives.”

The class is called Steps for Success. It matches seniors with mentors from the professional world to help them make it to graduation and prepare for life after school. Mentors help students apply for college and financial aid, write resumes and interview for jobs.

A lot of students at Oyler don’t get this kind of support at home, says mentor director Jim Stilgenbauer. “We had one student last year that nobody came to her graduation,” he says. “The only person that was there was her mentor from the program. So having that adult influence to say ‘Okay, I’m involved, I care about you, I’m paying attention to you,’ is huge for these kids to stay focused.”

The business lunch is meant to help them navigate the kinds of grownup encounters lots of people take for granted. At the lunch last year, one student thought his mentor must know the waitress because they had such a friendly conversation. “It’s not that they don’t want to do right,” says co-founder Michele Phelps. “It’s just that they haven’t necessarily seen it or experienced it.”

“We still did have a student that just stuck a whole chicken with a fork and ate if off the fork,” Stilgenbauer says. “But you know, baby steps,”

On a chilly Wednesday just before Christmas, the latest crop of seniors heads downtown. Fountain Square is just a short drive from the rundown rowhouses and empty lots of Lower Price Hill. But it’s a world away.

Raven Gribbins – 17 years old and dressed up in new jeans and high-heeled boots – totters past ice skaters and a Salvation Army bell ringer to the Rock Bottom Brewery. The chain restaurant and pub is decked out for the holidays and buzzing with the lunch crowd.

Raven’s mentor is Holly Gundrum, a real estate investor and physical therapist. They share a table with another senior, Crystal Kornegay, and her mentor. As they study the menu, Raven considers the chicken quesadilla. She likes the ones at Taco Bell, she says. Holly tells her the vegetables will be fresher here. “I don’t eat vegetables,” Raven says. By the time the waiter comes, she’s settled on the steak.

While they wait, they talk about sports and college. Both girls have applied to several schools. Raven will be the first in her family to finish high school. Then the food arrives and the girls face their first etiquette dilemma – whether to use a fork for their fries.

Crystal’s mentor shakes her head – fingers are fine. So they dig in. The lunch goes well. Nobody drops a knife. And before long it’s time to get back to school.

On the drive, Crystal and Raven debrief. “I thought everybody was going to be real, real dressed up,” says Crystal. “So when I came with pants I was like .‘I’m going to be the only one with pants on.’”

“I thought that, too,” Raven says.

As they get farther from downtown, the conversation drifts closer to home.

“Raven, did you hear about that boy who died by my street?” Crystal asks.

“Yep,” Raven says. “Did you hear about the shooting that happened up at West High Friday night?”

Holly pulls her SUV into the parking lot at Oyler and the girls go inside. Holly says Raven did pretty well at the lunch. “I guess I would tell her not to the order the steak,” she says. “That was one of the more expensive items on the menu.”

But Holly knows the finer points of restaurant dining are the least of Raven’s worries. The harder part will be getting her to a place where she can use those skills.

“I think she’s done well, looking at all the challenges she’s faced,” she says. “I think moving forward into college she’s going to have to work extremely hard. I worry a little bit about that — that she could give up.”

Raven is determined. She wants to study criminal justice in college and come back and improve the neighborhood. “I want to make something of my life,” she says. Raven says her parents have both been in and out of jail and struggled with drug addiction. “I want to make a better life than what they had,” she says.

The kind of life with business lunches.

Correction: An earlier version of this story misspelled the name of Jim Stilgenbauer. The text has been corrected.