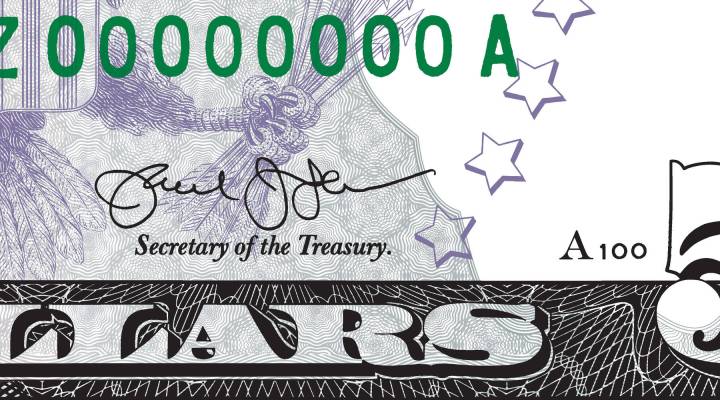 UPDATED (June 18, 2013, 3:00 PM ET): Secretary of the Treasury Jack Lew has now publicly provided his signature for printing on new currency and dollar bills. The first bill you may see it on will be a five-dollar bill note this fall.

President Obama nominated White House Chief of Staff Jack Lew to be the next secretary of the U.S. Treasury Department. Among the broad powers given to that office, the Treasury Secretary gets to put his signature on dollar bills.

Unfortunately, Lew’s signature isn’t all that legible — or particularly pretty. Which President Obama noted in his public appearance today:

“I had never noticed Jack’s signature, and … when this was highlighted yesterday in the press, I considered rescinding my offer to appoint him,” Obama said.

The president added that he’d like Lew to work on his penmanship.

“Jack assures me that he is going to work to make at least one letter legible in order not to debase our currency,” the president said.

That would make him the second consecutive Treasury secretary to alter his signature for appearance’s sake. Outgoing Treasury Secretary Timothy Geithner admitted to Marketplace, in an April 2012 interview, that he changed his signature before putting it into circulation.

Kai Ryssdal: I gotta ask you about your handwriting. Is it true that this used to be your signature

and you changed it into that

Timothy Geithner: Yes it is true.

Ryssdal: And why would you do that?

Geithner: You mean from this

? I thought you liked the one on the one dollar bill

Ryssdal: No, that one

Geithner: Well, I think on the dollar bill I had to write something where people could read my name. That’s the rationale.

What about you? If you got to put your signature on the dollar bill, how would you want it to look?

Yahoo came up with one way to mimic Lew — check out what your name would look like in his handwriting:

The Geithner Interviews
Tags in this Story
Share this Story