Sing a song of Walmart — pro or con

Sing a song of Walmart — pro or con

A federal District Court judge in Southern California has issued a tentative ruling that would make Walmart a defendant in a class-action lawsuit charging wage-theft and other serious labor violations. The suit, Everardo Carrillo et. al. v. Schneider Logistics et. al., has been brought on behalf of hundreds of low-wage temporary warehouse workers. They move goods exclusively for Walmart, but aren’t employed by the giant retailer — instead, they work for local staffing agencies.

Lawyers for the workers say this is the first time the giant retailer has been brought into a class-action over its alleged responsibility for workers who aren’t direct Walmart employees. Walmart is fighting the lawsuit. The judge’s formal ruling is pending.

Fights over Walmart’s role — as a global importer, giant employer, mega-retailer — seem to just get more and more contentious. And the battle is spilling over into pop culture as well.

Walmart has more than 8,500 stores worldwide, 1.3 million workers in the U.S. alone.

So it’s not surprising the company has gotten into our heads—and our headphones. We get it from both ends of the pop-cultural divide: pro-Walmart boosters and anti-Walmart activists.

I stumbled on a song covering a rowdy union rally last year outside a Walmart store at the Crenshaw Mall in South L.A. It was a corrido, based on a popular Mexican ballad, by Latino warehouse worker Jesus Aguire (a fellow-musician, Humberto Medina, co-wrote the song). The lyrics speak of leaving one’s homeland only to be abused working in the U.S. Aguire is a worker at the Schneider Logistics warehouse that is the subject of the federal class-action lawsuit.

Here’s something a bit hipper: L.A. hip-hop artist Phillip Meza took the makeshift stage at the same rally. He’s a former Walmart employee now helping to rganize for the worker-group OUR Walmart.

But the anti-Walmarters don’t have a monopoly on YouTube. You’ve got your pick of jumpy, scratchy videos of the Walmart cheer. Like these middle-school cheerleaders welcoming a new Walmart to town.

By the way, the squiggly on the Walmart logo — it’s part of the company cheer. Just surf the net and you find plenty of tribute songs and DIY videos shot without permission in Walmart stores.

In one of my favorites: these guys, Andrew and Caleb, are shown walking into a Walmart in Sulphur, Okla., and doing “The Walmart Song!!” for store employees — appreciative store employees.

Keep surfing — there are lip-sync dance videos to Justin Timberlake and One Direction, shot by friends sneaking around the store trying not to get kicked out — not half-bad, some of them.

It’s kind of a Walmart world out there. 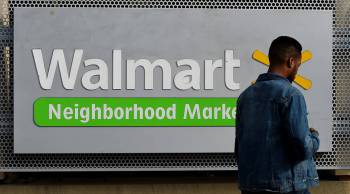