The bitter pill of globalization

The bitter pill of globalization

The thing that makes it possible for you to have a cup of coffee made from beans grown in Costa Rica or Ethiopia, or to wear a shirt of Egyptian cotton that was made in Indonesia also brings with it some downsides.

Like flu pandemics, SARS — and if you go back in history far enough — the plague.

Mark Harrison says during the first outbreaks of plague in Europe, the locals knew the sickness had something to do with the arrival of merchant ships, even if they didn’t know the biological causes behind it.

But it can be tricky to balance economic needs with public health safety. Harrison says, “It’s hard to quantify how much trade is lost but it’s clear that trade is adversly affected by quarantines of all kinds.”

There’s no undoing globalization. It’s all about risk management.

“I think we can do that in a way that doesn’t disrupt the international economy as much as it does at the moment.” Harrison says current policy of quarantines and sanitary embargoes leave much to be desired both when it comes to public health and when it comes to trade policy. 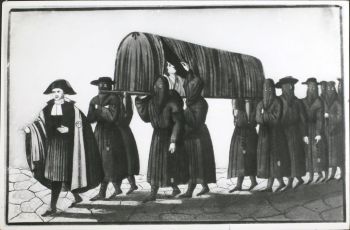