Why blind internet users are angry with Google, CAPTCHA

Why blind internet users are angry with Google, CAPTCHA

As you did your online holiday shopping, you might have run into a CAPTCHA or two. That’s an acronym for “Completely Automated Public Turing test to tell Computers and Humans Apart,” better known as the blurry visual tests that websites use to make sure you’re a human. And not, say, a computer program trolling for credit card numbers.

Google, which owns the most popular CAPTCHA service “reCAPTCHA,” announced recently it’s made its tests a little easier to decipher. But that hasn’t silenced critics who surf the web with their ears.

If you look at Google’s reCAPTCHA widget, there’s an option for an audio test instead of a visual one. Click on it, and at first you’ll hear a bed of static. Then a fuzzy, genderless voice will start reading numbers to you in slow-motion, with most of the numbers overlapping. It’s like you’re listening to a radio show with three robots talking over one another — with bad reception.

Blind web users are supposed to type in the characters they hear. That’s theoretically useful for people like Wayne Hawkins, a disability advocate in Sidney who is mostly blind.

“In Australia, you need to actually go through a CAPTCHA process to create a Skype account,” Hawkins says. “I listened to the CAPTCHA about 30 times and tried to type in what I thought I heard.”

But he never passed the test.

There is a reason, though, that Google makes the characters sound so garbled.

“They’re trying to find the sweet spot where the human perceptual system can understand it but it’s too difficult to write computer programs to understand it,” says Jeffrey Bigham, a professor at Carnegie Mellon University, where CAPTCHA technology was born in the 1990s.

When Bigham was a grad student at the University of Washington, he did a study of alternative audio CAPTCHA systems. Bigham found some systems were easier to understand, but they’re also, “probably the ones that were most easy for computer programs to solve. I think if there were an obvious better model, we’d be using it.”

In fact, Bigham’s co-author on that study now works for Google. According to a Google spokesperson, the team that just made the visual CAPTCHAs a bit easier is working on the audio ones, too.

Wayne Hawkins isn’t waiting. His campaign, “It’s Finally Time to Kill CAPTCHA,” got the attention of Google brass. They gave him a meeting, where he told the tech giant he understands the need for some security protocol. “But it doesn’t need to be inaccessible,” he says.

And “accessible” is the magic word.

“Any company that’s putting out either sites or mobile apps without considering accessibility for people with disabilities is really at risk,” says Lainey Feingold, a San Francisco attorney who negotiated agreements with companies like Bank of America and CVS to get CAPTCHAs off their sites. 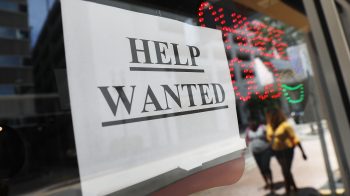