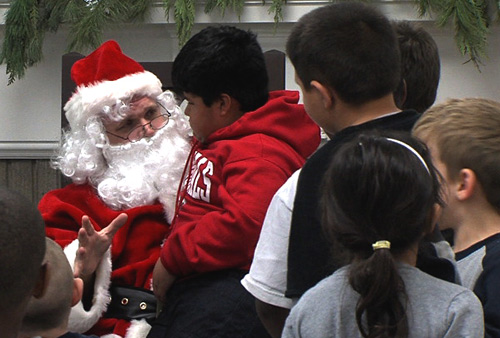 COPY
Oyler kids take turns telling the big guy what they'd like for Christmas. The local community delivers on the presents. Amy Scott
One School, One Year

It’s the week before Christmas break at Oyler School. Volunteers from the Cincinnati Bar Association sing carols in the hallways. Santa Cop pays a visit. And every class, from pre-kindergarten through eighth grade, has a party and presents. They’ve all been “adopted” by local businesses. First grader Josiline Ellis unwraps a pair of Bratz dolls from a volunteer.

“I don’t know her name yet, but she’s very nice to give it to me,” Josiline says.

Her name is Michele Heintz. She works at Paycor, a payroll processing company. “This is one of the big things we like to do at Christmas time, just kind of giving back to the community,” Heintz says. “And the kids enjoy it. You see it on their faces.”

Josiline, it appears, is also getting her two front teeth for Christmas. They’re just poking through. But she has her eye on a more exciting present.

“I also wanted a doggie,” she says. She talked it over with Santa. “He said he might,” Josiline says. “But sometimes he says that the dogs get pretty cold on the sleigh in the North Pole.”

The holidays can be a bleak time for families without a lot of money to spend on toys and gifts. That’s where schools often step in, with help from donations. Businesses and charities donate thousands of dollars worth of goods to Oyler families this time of year — parkas for the Ohio winter, baskets of food to take home for the holidays, and the festivities are nonstop.

“We’ve done a lot to try to make it…fun for kids, to kind of take their mind off some of the holiday season things that they won’t be involved in,” says Craig Hockenberry, the school’s principal.

The students also give back. This year Oyler high schoolers raised money to help two families in need celebrate Christmas.

Correction: An earlier version of this story misspelled Josiline Ellis’s name. The text has been corrected.