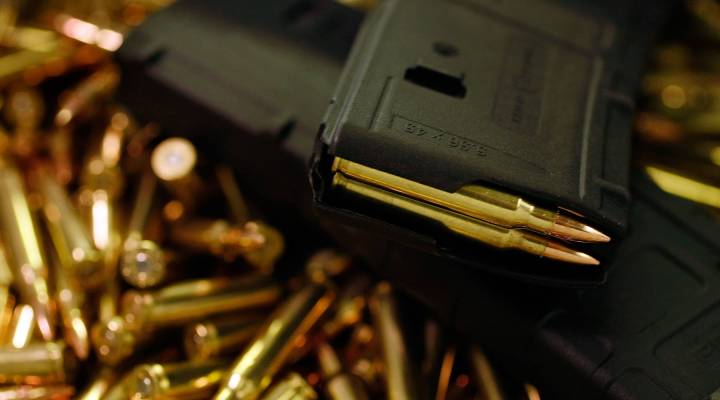 COPY
A magazine with newly manufactured 5.56mm cartridges is seen at Stone Hart manufacturing, Co. in Miami, Fla. When acts of violence shake the nation, sales of guns go up -- and the same happens with gun magazine sales. Joe Raedle/Getty Images
Guns and dollars

A magazine with newly manufactured 5.56mm cartridges is seen at Stone Hart manufacturing, Co. in Miami, Fla. When acts of violence shake the nation, sales of guns go up -- and the same happens with gun magazine sales. Joe Raedle/Getty Images
Listen Now

Under normal circumstances, you might be confuse the all the customers at Mid America Arms in South St. Louis with the Christmas rush, but not so this year.

“It’s been one of our best days in 13 years, but not for the right reasons,” says owner Mark Campbell.

Gesturing to his depleted shelves, Campbell says many of the customers are buying ahead of what is expected to be a ban on certain types of weapons.

“The wall’s pretty much picked through, any type of paramilitary rifle,” he says. “We’re down to just a few now.”

Also completely sold out: most high-capacity magazines, like the 30-round clips used in the Newtown massacre. Shopper Mike Charleville says he feels like he’s running out of time.

“I just read today on MSN that Bloomberg in New York, he’s got his flags waving and he’s all for all kinds of gun control, and I think our liberties are going to be taken away before too long,” says Charleville.

Likewise, St. Louisan Jeff Naber says he planned on saving his money for a new truck, but the events in Newtown changed his mind.

“I had some magazines that I was planning on buying, but you know, after that happening, I thought I better not wait another week,” remarked Naber.

Legislation expected to be re-introduced in January would ban clips of more than 10 rounds. And while the market for magazines and clips only accounts for a tiny fraction of the total gun industry, their continued use in mass murders means their shelf-life may be quickly shrinking to zero.