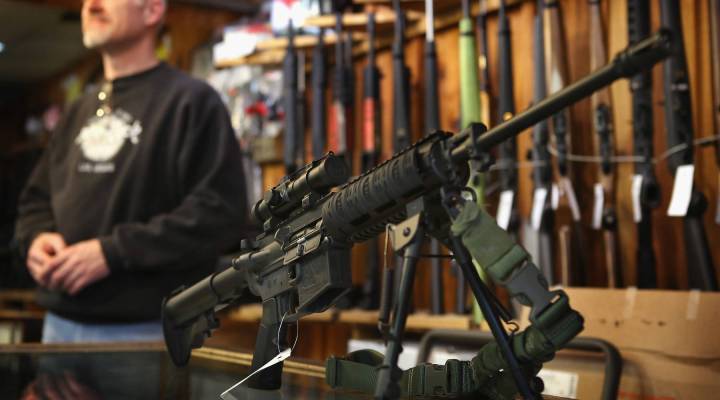 COPY
An AR-15 style rifle sits on the counter by Craig Marshall as he assists a customer at Freddie Bear Sports sporting goods store on Dec. 17, 2012 in Tinley Park, Ill. Scott Olson/Getty Images
Guns and dollars

The Newtown, Conn., shooting has raised the question of whether the tragedy’s impact will actually change the gun safety debate this time. It already has in some parts of corporate America.

After tragedies like the Newtown shooting, gun sales almost always spike, says Adam Winkler, author of “Gunfight: The Battle Over the Right to Bear Arms in America.”

“One of the sad ironies is, historically, retailers do very well when we have high-profile shootings as gun owners worry that they won’t be able to buy those guns tomorrow,” he says.

The AR-15 assault rifle, used in the elementary school attack, is a big moneymaker. In fact, Winkler says, it’s “perhaps the most popular firearm on the market today.”

In spite of that, Dick’s Sporting Goods announced it is suspending the sale of some semi-automatic rifles. Walmart and other retailers have removed information about the AR15 from their websites. Jen Drexler, a retail consultant with Insight Strategy Group, says mainstream retailers have to consider consumer backlash.

“Dick’s Sporting Goods, that’s the place I got my kids’ soccer cleats and my kids are 6,” she says. “And the thought they’re selling guns at the same place that sells cleats to my 6-year-old is just unacceptable.”

Investors are crying unacceptable, too. Private equity firm Cerberus said today it will sell one of its companies, Freedom Group, which makes the AR-15, after coming under pressure from its own investors.

But are these just short-term reactions? Max Wolff, senior analyst at Greencrest Capital, says no. “I think we’re going to see a lasting effect here,” he says. “There is a bit of a feeling in the markets that this may be the pivotal moment when America gets much more serious about gun control.”

One test will be how soon retailers like Dick’s Sporting Goods and Walmart resume their previous gun sales and promotions.