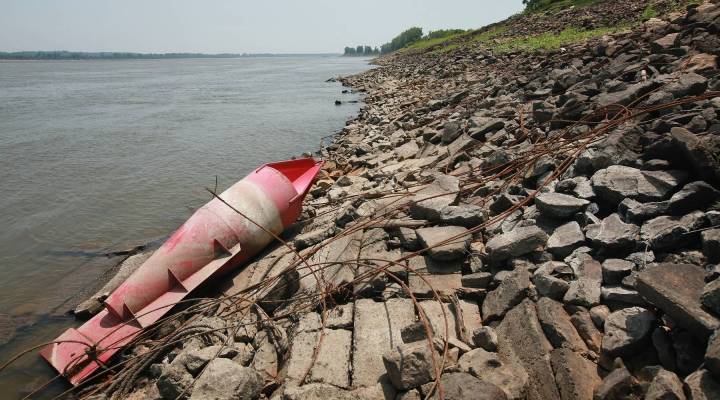 COPY
A buoy used to help guide barges rests on the bank after the water level dropped on the Mississippi River July 18, 2012 near Wyatt, Missouri. Scott Olson/Getty Images

A buoy used to help guide barges rests on the bank after the water level dropped on the Mississippi River July 18, 2012 near Wyatt, Missouri. Scott Olson/Getty Images
Listen Now

Politicians across the Midwest continue to press the President to declare a state of emergency on the Mississippi River to allow barge traffic to keep flowing.

Every year roughly $180 billion worth of freight makes its way up and down the river.

Fresh on the heels of the worst drought in half a century, river levels are forecast to drop even farther in coming weeks. Down on the Mississippi I met up with one of the men tasked with keeping traffic flowing over less and less water.

Lieutenant Colin Fogarty says the Coast Guard deployed a fleet of additional ships to St. Louis to help set navigation markers for barges like the ones chugging by us.

But despite the best efforts of the Coast Guard, it’s actually the Army Corps of Engineers that has the most direct control over shipping. Every year at this time, the Corps cuts the flow out of reservoirs upstream on the Missouri River to hold water back for the spring shipping season.

But, people downstream say they need that water right now.

“We estimate that $7 billion in cargo will stop moving on the Mississippi River if a nine-foot channel cannot be maintained through the winter months,” says Craig Philip, CEO of Ingram Barge Company, based in Tennessee.

Reducing the flow on the Missouri is expected to drop river levels in St. Louis by an extra three to four feet. A group of Midwest politicians is asking President Obama to declare an economic emergency, and direct the Army Corps to reopen the dams.

But upstream states say, “Not so fast.” South Dakota for example has called dibs on millions of gallons of water for use in the states oil-fracking boom.

Illinois Senator Dick Durbin says asking the President to settle what amounts to a water-war between states is a dicey prospect.

“Clearly we’re in, maybe a zero-sum situation. We may be able to help our commerce downstream, but if we do it at the expense of those communities and states upstream, you can understand, they’re not going to stand by for this and I’m not sure I would either,” says Senator Durbin.

For the time being, barge operators might be able to limp along with reduced load sizes and smaller shipping lanes.

“We need rain, that’s the bottom line, or we’re going to have to take other measures,” says Major General John Peabody of the Army Corps of Engineers.

Those other measures could costlier options such as moving freight by rail or truck.