Leading up to Black Friday, there have been protests at Walmart stores all over the country by Walmart workers and their labor union allies. Workers who move goods in Walmart warehouses in Southern California’s transportation hub have also been protesting over wages and working conditions.

As this battle unfolds, Marketplace has been looking at the future of the warehousing industry.

Southern California’s Inland Empire — a vast desert area east of Los Angeles, including Riverside and San Bernardino Counties — is home to the nation’s biggest concentration of warehouses. They are the first stop for imported goods arriving through the Ports of Los Angeles and Long Beach from Asia, on their way to big-box retailers’ distribution centers and stores nationwide. Nearly half of all imports to the U.S. pass through the region.

Every day, tens of thousands of warehouse workers across Southern California move these goods by hand or forklift on hot, dusty, sometimes-dangerous loading docks. The work is low-skill and low-wage and often performed by temporary workers who have little prospect of training or advancement.

Contrast that with work at the spanking-new Skechers shoe warehouse in Moreno Valley, California, at the southeastern edge of the Inland Empire, about sixty miles from Los Angeles.

Benzeevi says the facility was the largest warehouse in the United States when it opened in late 2011 — extending half-a-mile end-to-end along a busy Southern California freeway.

It is certainly one of the most high-tech. “We’re surrounded by a tremendous amount of very sophisticated equipment,” says Benzeevi, leading this reporter and a photographer on a tour, “computers, automation, robots and so forth.”

The building boasts solar panels and other energy-saving green-building features. The reception area has floor-to-ceiling windows. They look out on a fountain and reflecting pool, and beyond, 2,000 acres of undeveloped land—undeveloped for now. Benzeevi plans to build additional next-generation logistics facilities here for other clients in coming years. All told, the plot here constitutes the largest single plot of commercial-industrial land still available for warehouse development in Southern California.

You might think they were mixing pharmaceuticals or chemicals here. But what the equipment is actually mixing and matching is shoes—21,000 boxes every hour.

“Somebody may order thirty pairs of shoes, size 9, in blue, and 12 pairs of shoes, size 8, in red, and the equipment has to pick all of these out, out of this huge, ½-mile-plus long building” Benzeevi explains. The equipment finds, selects, moves into position, and prepares for packaging and shipment, orders from stores all over the country, as well as from individual consumers shopping online for home delivery.

The warehouse sports the latest in automated product-pickers and computerized conveyor belts.

“This equipment can pick up everything from a business card, to a big box, on its own,” Benzeevi says. “It will identify and understand exactly what it’s picking up.” It also remembers where each item — each box of shoes, of whatever size, color and style—is at every moment, until it leaves the building in a truck for delivery. “The equipment better remember,” says Benzeevi. “You’ve got 81 million cubic feet of space here, and at any point there’s a product sitting somewhere, so you need to know where it is.”

For the approximately 750 people who currently work in this Skechers warehouse, work-life is substantially better than in conventional warehouses in the region that this reporter has seen. The pay is higher; there are more permanent jobs and opportunities for advancement; the facility is cool, clean and relatively quiet; there’s even a gym for workers.

But, all this is only for a lucky few, among the many low-skilled, poorly-educated blue-collar workers who populate this region.

“The vast majority of what goes on here is automated,” says Benzeevi. “There are a few jobs for lower-skilled workers—loading individual orders, cleaning the facility, for instance. But most of the people who are running this equipment are sitting in offices upstairs, they’re programming, they’re running maintenance on the machines. If you can’t handle a computer, you can’t do 95 percent of the jobs in this building.

“You’re shifting people who may have been doing things manually,” Benzeevi continues, “to people who are managing the automation. There are probably fewer people required, but higher-skilled people. But that’s the nature of the world, just as companies had typing pools in the old days . . .”

And Benzeevi is off on a philosophical disquisition about technology and change, describing a future in which shoeboxes zip by at breakneck speed, with barely a human hand ever touching them. 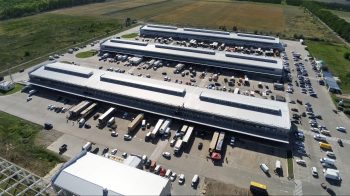 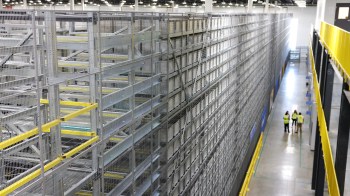