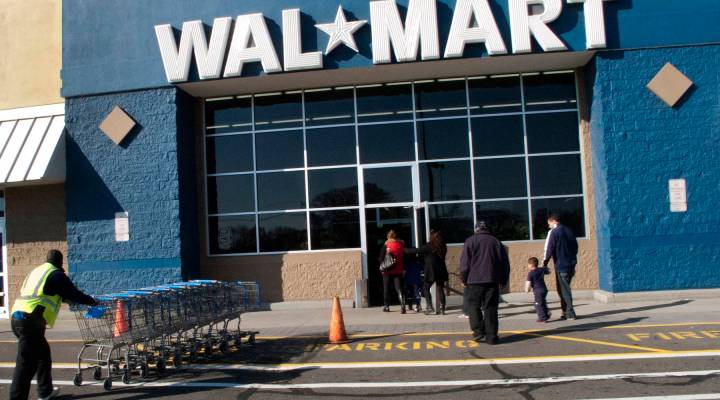 Walmart is awaiting a decision from the National Labor Relations Board. The retail giant filed a complaint with the NLRB to stop hundreds of anti-Walmart protests scheduled to take place on the all important Black Friday shopping day. The protests are being organized by OUR Walmart, a group of employees who say they’re fighting against unfair working conditions.

They’ve been protesting for weeks, and actions like these are common first steps to unionizing, according to Gary Chaison, a professor of labor relations at Clark University.

“This is what’s often called a corporate campaign,” says Chaison. “It’s often an attempt to pressure an employer to stand back and be neutral during an organizing drive.”

Chaison thinks Walmart is very unlikely to stand back and be neutral. The retailer claims the planned Black Friday protests violate a law that limits picketing while workers are trying to organize. OUR Walmart has gotten support from the United Food and Commercial Workers Union.

“Walmart’s reaction tells me they’re taking this threat seriously,” says Ron Seeber, a professor of industrial and labor relations at Cornell University. Hey says the group is hitting Walmart where it hurts.

“So here we have the biggest shopping day of the year possibly, and when could you have more of an impact withholding your labor or causing a demonstation of some kind than on that day?”

Walmart told Marketplace in an email that it’s not worried about the protests:

“We are preparing to have a great Black Friday across all of 4,000 locations in the U.S and we don’t think these actions… will have any impact on our Black Friday plans whatsoever… These so-called protests involve a handful of associates at a handful of stores. In fact most of the protesters don’t even work for Walmart. They are union organizers and union members who work somewhere else.”

The National Labor Relations Board told Marketplace doesn’t expect to make a decision before Thanksgiving Day.