As Myanmar opens up, U.S. firms wade in

As Myanmar opens up, U.S. firms wade in

President Obama’s visit to Myanmar Monday makes him the first sitting president to set foot in that country, which many still call Burma. He may be new to the nation, but many American corporations are already establishing a presence there. They’re taking advantage of easing U.S. economic sanctions to jump on brand new business opportunities in construction, energy, infrastructure, consumer goods and tourism in a mostly untapped market with a large population.

Not surprisingly, a country just emerging from years of military rule presents a number of challenges to American firms. Energy, transportation and communication infrastructure are all widely lacking. Firms must choose alliances and suppliers carefully — to avoid dealing with those linked to the worst excesses of the military regime. The primitive banking system means many transactions are done in cash. It’s perfectly normal to carry around gangster-sized rolls of money. Credit cards are rarely accepted. The country’s first ATM just arrived late last year.

“If you have to walk around and do all your transactions in cash, as I had to do on my trip there, you see what a difference it makes,” says John Goyer, senior director for Southeast Asia at the U.S. Chamber of Commerce.

Despite the headaches, American firms are heading in. GE, Coke, Pepsi, Visa, MasterCard and many more are eager to get in on a key piece of Asian real estate. The chamber is bringing a delegation of American business leaders to Myanmar in February. Even for firms with experience in the region, Myanmar is an entirely different story, and businesses have to be ready for surprises.

“You can move forward, sort of building the plane as you fly it,” says Richard Sawaya, director of USA*Engage, a business group that opposes trade sanctions.

American tourists may help Myanmar’s economic emergence as tourists. Interest in visiting is growing, despite a relative lack of hotels and amenities compared to other Southeast Asian destinations. The country’s extended estrangement from the modern world is part of why it’s an intriguing destination, with sprawling beaches unspoiled by high-rise hotel developments and major sites unmarred by throngs of tour buses.

“The experience there is really like you’re being transported back in time and kind of seeing a different way of life,” says Matthew LaPolice, who specializes in Asia and the Mideast for Absolute Travel.

The influx of American businesspeople and tourists is quite a turnaround for the nation that many of them know mainly, if at all, for its long detention of celebrated dissident and Nobel Peace Prize laureate Aung San Suu Kyi. The former political prisoner met President Obama during his visit.

Companies hoping to plant flags of their own face a frustrating road to new profits in Myanmar. But the country’s potential is hard to ignore.

“It’s a challenging business environment,” says Joshua Kurlantzick, Southeast Asia fellow at the Council on Foreign Relations. “On the other hand, you don’t have countries with 50 million people or more just open up overnight.” 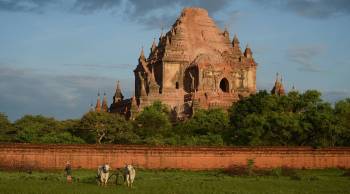