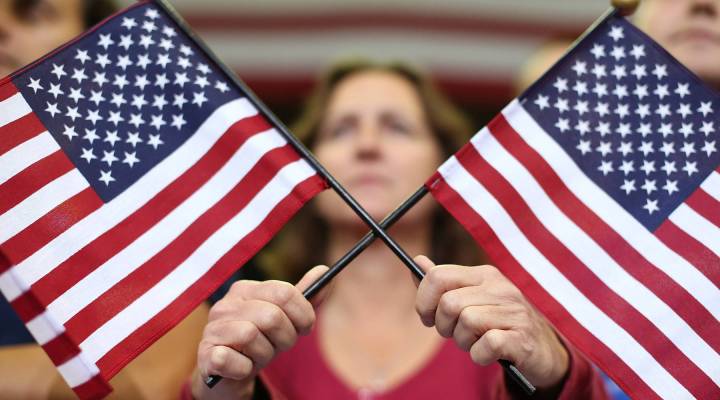 The economics of secession

COPY
A supporter of Republican presidential candidate, former Massachusetts Gov. Mitt Romney holds American flags as she looks on during a campaign rally. Petitions for state secessions are popping up, but are they economically feasible? Justin Sullivan/Getty Images

The economics of secession

A supporter of Republican presidential candidate, former Massachusetts Gov. Mitt Romney holds American flags as she looks on during a campaign rally. Petitions for state secessions are popping up, but are they economically feasible? Justin Sullivan/Getty Images
Listen Now

As of today, petitions have been filed from people in all 50 states to secede from the union. A handful of the petitions, including those from Louisiana, Alabama, Texas and Florida, have gotten the 25,000 signatures required for a White House review.

Supporters of the drives point to the trillions of dollars in taxes the states give the U.S. government every year and ask, “What has Uncle Sam done for us lately?”

A lot, says Jared Bernstein, who is a senior fellow at the Center on Budget and Policy Priorities.

Bernstein says for most states, the value of those benefits outweighs what they hand over in taxes. But there are states that give more than they get, like New York and Colorado. Should they secede? Bernstein says no.

“The answer’s no, because we have such an interdependent system,” he says. Things like highways, disaster aid, and the military would be a big bill for a potential loner state.

Wharton economist Kent Smetters says staying together is a better deal for all involved and is completely unrealistic for most states. Still, he says there is one state that could potentially pull it off.

“That would be Texas,” Smetters says. “Texas actually has its own electric grid. It’s big enough that they could easily have their own money supply and they have the gulf that they could ship from.”

But what about Uncle Sam? Would his bottom line get a boost if he got rid of a nephew or two? Smetters says the secession of one state would solve a lot of problems. “The state of Illinois is basically our Greece,” he says, adding that Illionis’ pension situation could require a federal bailout down the road.

But today’s basket case could be tomorrow’s bread basket — that’s bread as in money, says Ernest Istook, a fellow at the Heritage Foundation and former congressman. “States that were prosperous at one time may not be as prosperous now. And the reverse is also true,” he says.

After all, you never know where the next Silicon Valley or shale deposit might be, so maybe it’s better to keep the family together.