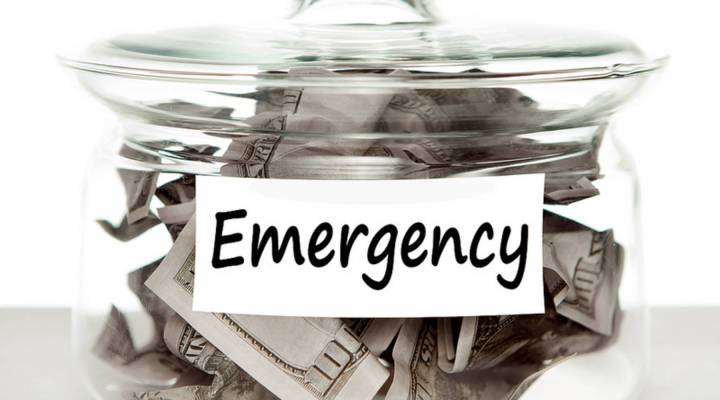 Rebranding the emergency fund… and how to save for it

COPY
Emergency fund/uncertainty fund -- whatever you want to call it -- Carl Richards from the New York Times says it's important to set aside money for a rainy day. flickr.com/Tax Credits

Rebranding the emergency fund… and how to save for it

Emergency fund/uncertainty fund -- whatever you want to call it -- Carl Richards from the New York Times says it's important to set aside money for a rainy day. flickr.com/Tax Credits
Listen Now

Ah, the emergency fund — the savings you should have ready for a rainy day or worse, a jarring job loss or big medical bill. But with all the other financial investments you are supposed to be handling — your 401(k), stock market, insurance, mortgage, the list goes on — is it realistic to think that this one-size-fits-all measure fits, well, all?

Financial adviser and napkin artist Carl Richards wrote about this recently in the New York Times.

He says instead of calling it an emergency fund, a better name might be “uncertainty fund” — a term originally coined by fellow financial adviser Manisha Thakor.

“My thought was that the term ’emergency fund’ was generic and had the sort of standard thumbs of rule applied to it,” Richards explains. “You’re supposed to have two to twelve months of money set aside, and I just thought we need to look at this at a new angle. Where’s the uncertainty life in you life? Where is risk coming from?”

Richards says figuring out what type of uncertainty you have in your life should have an impact on the size of your uncertainty fund. If your job is pretty stable — which might not be many of us — your uncertainty fund doesn’t need to be as big as someone who, say, takes a lot of risk in his or her professional life.

But the very idea of setting anything aside for an uncertainty fund can sometimes feel very overwhelming. Richards says it’s important for people to stop for a second, take a big breath and figure out what can be done.

“Maybe find some income on the side. Maybe pick up an extra shift at work and not spend it — even if it’s cash in the Mason jar underneath the bed. Some plan to get there. What I’ve found is that as soon as we get some plan to make progress, we start to feel better and that starts to build on itself and it starts this wonderful cycle of good feelings about money instead of bad,” says Richards.

But how do you take that first step to step back?

“I think we’ve got to get to the point where we realize look, the best we can do is the best we can do. Our current reality is what it is. Sort of put on our no-blame, no-shame hats, get real about this stuff and realize that nothing’s going to change until we sort of face up to our own situation,” says Richards. “Is there one little thing we can do this month different than we did last month?”

Richards says people shouldn’t get too overwhelmed. There’s some truth to the saying: “You eat an elephant one bite at a time.”

“That’s my point is we’ve all got to have some emergency plan, some uncertainty plan, hopefully to build up this fund,” he says.

For more tips on bulletproofing yourself finances — check out our guide.