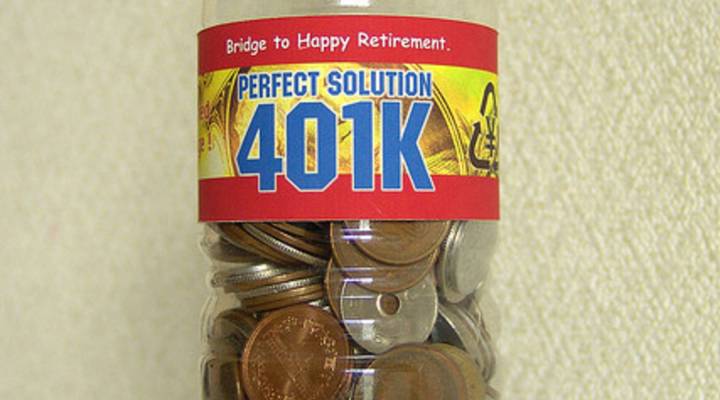 COPY
Increasingly, retirement funds are being used for anything but retirement. But there are huge risks involved with raiding your retirement to start a business or for private equity investments. flickr.com/MJ/TR

Increasingly, retirement funds are being used for anything but retirement. But there are huge risks involved with raiding your retirement to start a business or for private equity investments. flickr.com/MJ/TR
Listen Now

Even with all the warnings about the importance of saving for retirement, more and more people are raiding those funds for other purposes. They’re using 401(k)s and IRAs for things like new business startups, purchasing rental property, and private equity investments. An entire industry has sprouted up around accessing retirement funds early. Financial companies are advertising that they can help you make money off investing your retirement money, tax free. Steven Davidoff writes the Deal Professor column for the New York Times and he wrote this week about the risks involved in allowing people to use retirement money for… well, anything but retirement.

Davidoff writes in his column: “Instead, 401(k)s and individual retirement accounts are becoming money pots used to invest in business start-ups, speculate in gold and buy private equity investments. Such maneuvers come with big tax advantages. But they may also leave their users penniless in retirement, while their ability to evade taxes can cost the government.”

Davidoff says the idea of using retirement funds to start a business is not new, but it’s a risky endeavor. In one technique, people roll over their 401(k), start a company, create a new 401(k) and start a business. But Davidoff warns that this can leave people with nothing.

“The businesses that have started, the IRS found that most have actually failed using this technique,” he says.

Given the risks, why might people want to raid their retirement funds to funnel money into a new business? Davidoff points out two reasons: people like to speculate and follow the herd. He says a big problem with this concept is that it’s all tax free.

“For many people, it just won’t work out. But if there are gains, they can be spectacular and that’s money that, frankly, is sheltered from taxes and probably not what the people who developed IRAs or 401(k)s meant to give a tax benefit to,” he says. “It’s not meant to be this speculative vehicle, it’s meant to be there 30 years from now. But if you’re going to do it through a retirement plan, perhaps we should think about whether that should be allowed or not.”

Davidoff says he doesn’t know of any regulations for businesses that may encourage people to tap retirement funds for alternative uses.

“The IRS investigated these plans earlier in 2009, ” he says.  “One form of them, and actually one of the schemes to use your 401(k) or IRA to start a business, is called a ROBS plans ironically enough — a rollover for business startups. You really can’t make this stuff up. But [the IRS] did nothing more than say we’re going to scrutinize them to make sure they follow the strict IRS regulations to do this.”