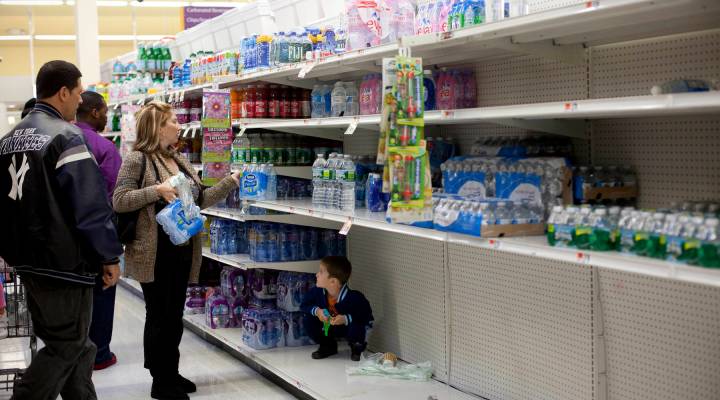 People shop for bottled water at a supermarket in the Rockaway Beach neighborhood of the Queens borough of New York City. Allison Joyce/Getty Images
Listen Now

The Northeast has taken a hammering this week. We’ve seen the pictures: water and sand in the streets, houses washed away, lights out in entire districts of cities.

It looks as though Hurricane Sandy has done a good job of destroying some communities — and not just physically. The images have also shown people swarming grocery stories, snapping up emergency supplies, and fighting over electrical outlets and gasoline. These are clear signs of neighborhoods in crisis.

But while disaster can destroy ties, it can also bring communities closer together.

Dan Ariely is a professor of behavioral economics at Duke University. He points out that that altruistic feeling people feel  immediately after crisis like Hurricane Sandy could actually last for quite a while. There are two reasons: First, people get to realize how much they depend on other people. Secondly, people look around at what others are doing in times of crisis, and once they see someone next to them helping their neighbor, they begin to see it at the social norm.

“How do you know what’s the right behavior? We look around us and we see how other people are behaving and we take that as a singal for what appropriate behavior is,” says Ariely. “I think given all the nice cases of how other people are treating each other nicely, there’s a good chance other people would watch it, would look at this as the standard norm and would actually keep on behaving this way.”

But what happens when people realize food and water are running low? Do they keep helping their fellow man?

Ariely uses an old experiment to illustrate his point. In the experiment, subjects were offered pieces of chocolate for free. As they were passed around the room, each person only took one or two — presumably thinking of others. But once they put a price on that chocolate, everybody wanted to buy as many as they could, quickly draining the supply.

In theory, the same could apply in real life during or after a disaster. If a disaster relief crew at a community center is handing out water, everyone would only take what they need, knowing they are in the same boat as everyone else. But if it is offered for sale at a supermarket, the first people who show up might recognize that it’s a commercial world and buy as much water and supplies as they can — leaving shelves empty.

Thankfully, many storeowners haven’t been jacking up their prices during this particular disaster as they do in some crisis situations.

“I think everybody feels like they’re in the same boat,” Ariely says. “In this particular case, the tragedy is so large, everybody feels connected to it. Everybody is suffering to some degree and taking advantage of your fellow men who are in the same boat probably feels much worse than taking advantage of other people who you don’t feel as connected to.”