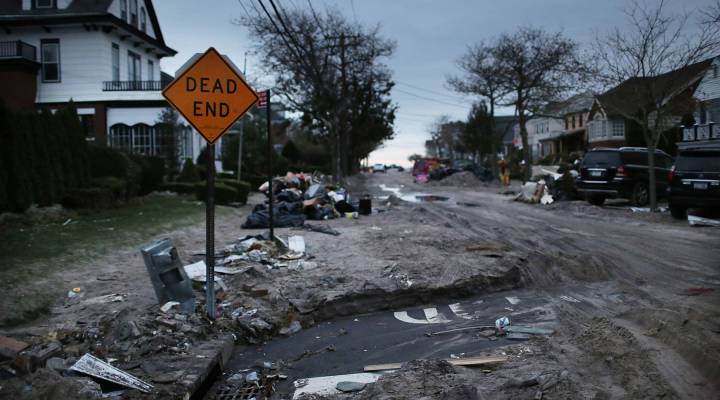 COPY
Mounds of debris pile up in the heavily damaged Rockaway neighborhood in Queens where a large section of the iconic boardwalk was washed away on November 2, 2012 in New York. Limited public transit has returned to New York and most major bridges have reopened, but will require three occupants in the vehicle to pass. Spencer Platt/Getty Images

Mounds of debris pile up in the heavily damaged Rockaway neighborhood in Queens where a large section of the iconic boardwalk was washed away on November 2, 2012 in New York. Limited public transit has returned to New York and most major bridges have reopened, but will require three occupants in the vehicle to pass. Spencer Platt/Getty Images
Listen Now

Superstorm Sandy’s toll rose throughout the week this week — both in cost and in lives. For many people, the damage is incalculable. They lost their homes. They lost their businesses. It is nothing short of yet another national tragedy caused by nature’s fury. Disasters like this leave us vunerable and it’s at those times when we are also most susceptible to fraud. Scam artists are already thinking up ways to prey on people dealing with Sandy’s aftereffects.

Bill Kresse, director at the Center for the Study of Fraud and Corruption at Saint Xavier University, says that after every storm, there are fraudsters attracted to every disaster. He says the first fraud people should watch out for is the “contractor fraud” — people who will get you to try to sign a contract with a big cash payment up-front to do work that may not ever get done or that is done shoddily. Kresse also warns that people should be prepared to get approached by folks who will offer help in getting federal money.

“The federal government has a lot of workers out there. Additionally, the insurance companies are flooding the region with claims adjusters. But there will be those who come forward and say, ‘Oh if you come to us, we will get you additional money, we will help you through the process if you pay us so much up-front.'” he says. “It’s the payment up-front that’s always the tip off.”

A contractor may request a small amount of money up-front to get the initial materials to start work, but they shouldn’t ask for big payments up-front, Kresse says. And it’s not just the people directly involved in a crisis who are vulnerable. Kresse warns that people who are watching a disaster unfold from the outside and want to help in some way are at risk as well.

“Probably the most prevalent type of fraud that takes places after a disaster are the fraudsters who go after the very terrible inclinations of the American people, who will be sending out massive emails and even telephone calls. I’ve even seen cases where they will go door to door trying to collect money supposedly for disaster relief,” says Kresse. “These folks will go in the name of existing charities, or they’ll even make up sound-alike charities. They’ll create a URL for a charity that doesn’t exist.”

Kresse says Americans haven’t gotten any smarter with the mechanics of avoiding frauds. But fraud never sleeps, he warns.

“It’s about 5 percent of the population who are willing to do whatever it takes to take advantage of another person, so that’s a significant number of people out there who are willing to rip you off. So we — the other 95 percent — must constantly be vigilant,” he says.