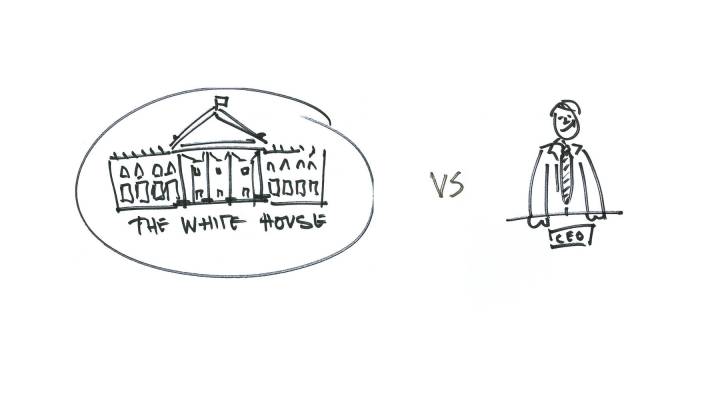 Running the U.S. economy is just like running a business, right? Sr. Producer Paddy Hirsch explains the differences between a president and CEO. Marketplace
Marketplace Whiteboard®

Running the U.S. economy is just like running a business, right? Sr. Producer Paddy Hirsch explains the differences between a president and CEO. Marketplace

I’d like to tell you that I’ve never met an analogy that I didn’t like, but I’m afraid the “running the U.S. economy is just like running a business” analogy leaves me cold.

It’s not that there aren’t significant comparisons to be made. Just like a company, the U.S. has money coming in the door (income), and money going out the door (expenses), and the leaders of both the company and the economy strive (if they’re smart) to balance their budgets year after year.

But that’s really about as far as the analogy extends.

Let’s look at the income side first. A company’s income is the money it makes from sales of its products. The nation’s income is derived from taxes and fees. The difference is that people have no option when it comes to taxes: they have to pay them by law. Paying for a company’s product, on the other hand is entirely voluntary.

That doesn’t mean that income doesn’t go up and down for the U.S., in the same way as it does for a company. If the economy is bad, people earn less, import less and do less business — which means they pay less in taxes, so the money going into an economy can fall.

The big differences between the economy and a company really kick in when income falls sharply. If a company’s sales go through the floor for some reason — maybe a key supplier is cut off, or a competitor takes over the market — the company has a number of options open to it.

It can make steep cuts in its expenses by cutting payroll, laying off workers, even closing down entire divisions. The U.S. government doesn’t have the same kind of freedom in this regard. We have a number of “divisions” that cannot be shut down: Medicare, Medicaid and Social Security are the big entitlement programs — which, when combined with a number of other mandatory or non-discretionary spending programs, took up more than 50 percent of the budget in 2011.

That leaves so-called discretionary spending which is all the optional stuff like defense, highways, education, foreign aid, the post office, veterans benefits and public health. The point is that the president’s hands are tied when it comes to cutting an economy’s costs, many of which are fixed. In a company, no costs are fixed — and in a crisis, everything is on the table.

Another option open to a company is diversification. A really nimble CEO might lead her company into an entirely different line of business. The president has no such freedom. He could diversify around the edges of the economy, perhaps investing in alternative fuels or new health care of technology research, but in the end his business is keeping as many people in the nation as possible employed, sheltered, protected, clothed, fed and happy.

The last option open to the company is to borrow. When the chips are down, go to the banks and get a loan that will help you dig your way out of whatever hole you’re in. Nations do the same thing. Stuck in an expensive foreign war? Borrow. Spent too much on pointless education programs? Borrow. Unable to fund your entitlement programs? Borrow.

A government’s reasons for borrowing may be similar to a company’s reasons for borrowing, but when it comes to the U.S., the effects are very different. The more a company borrows, the more dangerous it looks to potential lenders — and the higher its borrowing costs become. The same runs true for most nations, but the U.S. is something of an exception. Right now our debt load is more than 100 percent of GDP — in other words, we owe more money than we make each year. And yet our borrowing costs are still extremely low. If we were a company, we’d be paying a fortune in interest, if we could even find anyone to lend to us. And yet we’re able to keep on borrowing, over and over, at very low rates. That’s not to say that we should borrow — 6 percent of our national budget went to pay debts in 2011, so it’s still expensive even when it’s cheap. And most companies would tell you that because capital is the lifeblood of a company and can make it grow, they’d borrow too, if they could do it as cheaply as our government can.

So much for the business of running a company compared with running an economy; what about the person?

First, it’s worth looking at the different goals of a company’s CEO and a nation’s president. The CEO’s aim is to make money for his shareholders. The president’s aim is to create and maintain the optimum conditions for the perpetuation of life, liberty and the pursuit of happiness.

Then there’s the way a company is set up — in a very defined hierarchy in which, once the CEO gives an order, the hierarchy moves to execute her wishes. That’s not the way things work in a government. The president can want something until he’s blue in the face, but that doesn’t mean it’s going to happen. He has a to convince a Senate and cajole a House of Representatives first. Leaders of companies and countries need to be visionary, driven, relentlessly hardworking and ruthless in their drive to succeed, but a president requires an additional set of political skills that most CEOs can manage without. Diplomacy, charm, guile and optimism in the face of constant setbacks are just some of the characteristics a president requires — because he’s not running a company where people will do what he says, when he says it; he’s running a society where he must convince people that he’s doing what they want him to do.