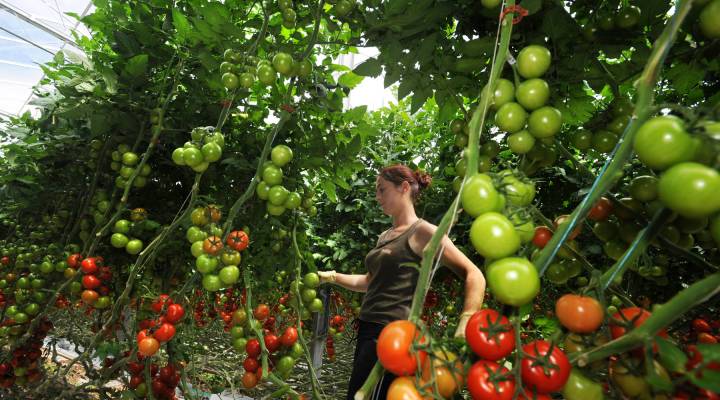 COPY
Author Tracie McMillan went undercover at a number of places around the country to find out exactly how food gets from the farm to your dinner table. She discusses her experience as a farm laborer. Frank Perry/AFP/Getty Images
Food and Drink

Author Tracie McMillan went undercover at a number of places around the country to find out exactly how food gets from the farm to your dinner table. She discusses her experience as a farm laborer. Frank Perry/AFP/Getty Images
Listen Now

We come face to face with food every day — from the supermarket aisle to leftover cake at the office. But we can’t always take that food at face value. Understanding what we eat and what goes into the cost of what we eat takes a little digging. Tracie McMillan, a journalist and author of “The American Way of Eating,” went undercover to get a better sense of where this country’s food comes from.

Her assignment took her to work as a produce clerk at Walmart in Michigan, where she found it tough to eat well on what they paid her. She also spent time as a server at a Brooklyn Applebee’s, where she was shocked at how little fresh food was found in the kitchen. Each time McMillan moved to a different workplace, she gave herself a start-up fund of minimum wage for one month. Because she was spending only two months at each job, she really had to live off of her wages. Her story as a farm laborer in California is perhaps the most eye-opening of her experiences.

The first third of the book McMillan describes her time in the fields picking grapes, peaches and garlic — none of which were terribly pleasant experiences. To save money on housing costs, she lived with other people. At one point she had 17 roommates. Eventually, she ended up running out of money to buy food for herself.

“My sense of how to budget was still really based on a relatively middle class experience. If you’re working field labor, you actually eat four meals a day because you eat at 4 in the morning when you get up. You eat at 9 a.m., which is lunch in the field. You have dinner at 7 o’clock at night and so you’ve got to have some sort of afternoon meal,” she says. “I didn’t really calculate that into my plan.”

One of the most shocking things she discovered was how much cheating occurs in terms of what workers are paid versus what they actually worked.

What can be done to fix the problem? One suggestion from McMillan is to turn to lawmakers, “to demand things from our politicians to give us a food system that feeds us well.”

Read an excerpt from the book “The American Way of Eating.”