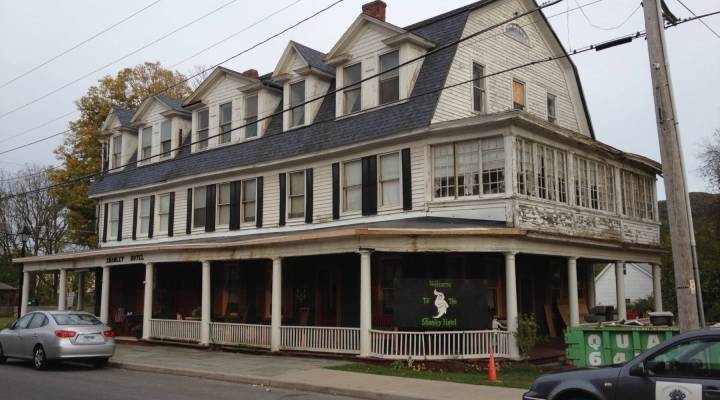 The economics of ghost hunting

COPY
The Shanley Hotel in Napanoch, N.Y., claims to be haunted by dozens of ghosts. People are spending real money to experience the paranormal. Daniel Huebbe

The economics of ghost hunting

The Shanley Hotel in Napanoch, N.Y., claims to be haunted by dozens of ghosts. People are spending real money to experience the paranormal. Daniel Huebbe
Listen Now

This week’s food show wouldn’t be complete without talking a little bit about candy: The official food of Halloween. Americans will be spending more money than ever on the sweet stuff this year. Between candy, costumes and haunted hayrides, we’re going to shell out about $80 a piece on average this Halloween, according to the National Retail Federation.

But for some consumers, the fright spending is more of a year-round thing. Take Michael Valentino, who took a three-hour trip from New Jersey to the tiny town of Napanoch in upstate New York to spend the night in the haunted Shanley Hotel.

“Today’s my birthday,” he says. “I just turned 30 and I wanted to do something that I had never done. So I was online looking at this place and I was like, I want to do this, this is awesome.  And we booked it, like last month.”

The other part of that “we” is Valentino’s girlfriend, Chelsea Pearcell. She’s less excited about the paranormal possibilities of the Shanley.

Pearcell says she does not want to have a paranormal experience at the Shanley, but nearly everyone else there does. The hotel charges $85 per person. In return, it gives you a haunted room, a historical tour and offers equipment and guides to help you ghost hunt late into the night.

But if you think spending $85 to see a ghost is a lot, you should meet a serious ghost hunter. Willy Hassel has been tracking the paranormal for 10 years. He is showing off his latest buy: “This is a full spectrum camera,” he says. “The infrared spectrum and the ultraviolet, which you can’t see with the naked eye, this camera will pick up the whole thing. That’s my newest toy.”

Hassel leads a team called Spirit Chasers Paranormal and estimates he’s spent around $900 on ghost hunting equipment. “When you get hooked, like anything else, you start spending money,” he says.

It might seem strange to spend money trying to see a ghost, but more and more people are willing to pay, says Sal Nicosia, owner of the Shanley. Nicosia says these days most of his guests are first-timers in their 20s and 30s who’ve’ve gotten curious after seeing ghost hunting reality shows.

“Just like you see tonight… we get a lot new people, never done this before,” he says.  “It gives me a satisfaction seeing the expression on their face, that there is something there.”

Meanwhile, on the spooky, unrestored third floor of the Shanley, Spirit Chasers Paranormal member Michelle Hamel has just had a sighting. “I’m walking down, I’m looking room to room…  I saw a dark, tall person waving.” Unfortunately, the figure was not caught on camera. Though, later that night, Hassel says he did get a recording in one of the rooms: a ghostly voice telling him to get out.

How did the amateurs do? No hard evidence, but Valentino and Pearcell did get a feeling in one of the rooms. “Like a lead blanket, where like you get weighted down,” says Valentino.  “Like you’re about to be shocked with something.”

Pearcell felt it, too. “I actually felt it in my spine,” she says.

The payoff for ghost hunting? Bad feelings, shadow figures, angry voices and, of course, a good ghost story of your own.