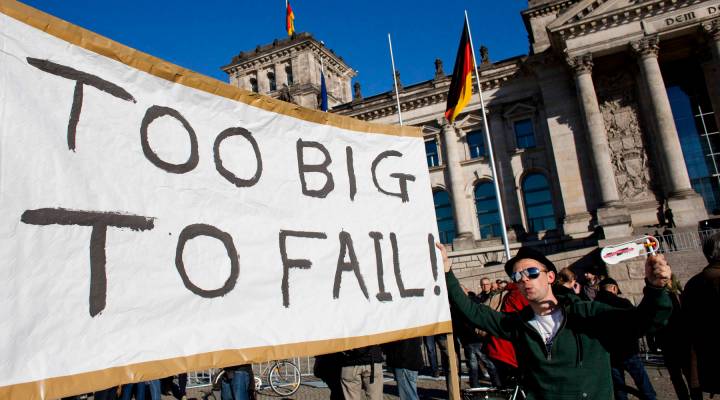 What makes a company ‘too big to fail?’

COPY
Prudential Financial is under federal scrutiny, along with several other companies, for being a "systemic risk." Carsten Koall/Getty Images

What makes a company ‘too big to fail?’

Prudential Financial is under federal scrutiny, along with several other companies, for being a "systemic risk." Carsten Koall/Getty Images
Listen Now

Is Prudential Financial too big to fail? Bloomberg reports that federal regulators are looking into the insurance giant to gauge whether the company is “systemically important.” If it is, Prudential could be in for a world of red tape.

What does it mean if a company is systemically important? “You have to be incredibly successful, because you have to be big and interconnected,” says Justin Wolfers, a professor of economics and public policy at the University of Michigan. “It means they’re so big and their financial transactions are so interconnected with other firms, if they went belly-up, it could possibly cause some kind of financial crisis.”

Looking at the systemic importance of companies is part of the Dodd-Frank Financial Reform Act — a response to the financial crash. A federal council was created to watch for companies that could be the next Lehman Brothers or AIG. Lawrence White is an economist at the NYU Stern School of Business. He says the financial crisis showed us “just how fragile our financial system had become and how systemic roughly a dozen very large financial institutions had become.”

If regulators decide a company is a systemic risk, the government would get very interested in everything about it. Management decisions could be closely watched; a company might have to keep more cash on hand or might not be able to increase its debt, which could affect payments to shareholders.

Matt Slaughter, at Dartmouth’s Tuck School of Business, says deciding which companies pose a systemic risk and what to do about it is very new territory, and there are still very basic questions. “The challenge is in the details of how you designate an institution as potentially systemically risky,” he says.  “And what that means for its actual operations and oversight.”

So far, no company has been declared “systemically important,” but along with Prudential, AIG,MetLife and General Electric’s financial arm are under review.