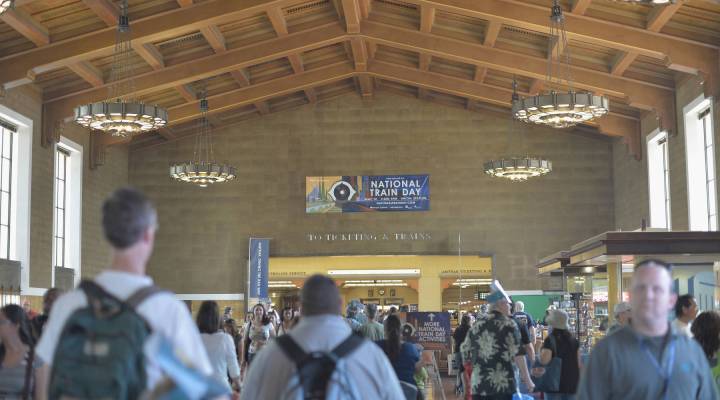 COPY
Amtrak is hoping to lure travelers away from other means of transport, like airlines, with new high-speed rail service. Charley Gallay/Getty Images for Amtrak
Transportation Nation

Amtrak is hoping to lure travelers away from other means of transport, like airlines, with new high-speed rail service. Charley Gallay/Getty Images for Amtrak
Listen Now

Illinois Governor Pat Quinn will board an Amtrak train heading from Joliet to Bloomington today. The trip is meant to showcase part of the state’s new high-speed rail line which will eventually run all the way to St. Louis.

Amtrak hopes the new faster service will lure travelers away from other means of transport, like airlines.

The high speed for Amtrak trains traveling through the state of Illinois is about 80 miles per hour eventually Amtrak hopes to boost speeds up to 110 miles per hour.

Marc Magliari, a spokesperson for Amtrak, says the company wants to cut travel time between St. Louis and Chicago to around four hours. “Right now we are about two hours longer than flying. We’re going to get that within an hour of flying or less over time and we’ll get more business that right now is flying.”

Magliari says faster trains mean more round trips per day, which for many travelers is an even bigger selling point than just speed. “Those are key elements when you sell travel. And certainly we’ve shown that everywhere we’ve added frequency and reduced travel times, the ridership goes through the roof because people are looking for better options than driving or flying.”

Yet, not everyone is on-board with Amtrak’s chances of luring riders away from regional air service. Professor Ray Mundy, the Director of Transportation Studies at the University of Missouri St. Louis, says people flying from St. Louis to Chicago are likely transferring onto other flights, meaning they aren’t apt to take the train instead.

“So, literally the amount of people that are going from downtown St. Louis to downtown Chicago that would be affected by improved rail service…probably wouldn’t be enough fill up on 737 that Southwest flies.”

Victoria Day, with the industry group Airlines for America, points to places like the Northeast, where high-speed service has been available for years. Even there, she says, Amtrak still couldn’t exist without government support. “Unlike commercial aviation which does pay for its own infrastructure and operating costs,  through taxes and user, high-speed rail doesn’t and that doesn’t maintain a level playing field when both modes are competing for the same passenger.”

But it’s not all about the passengers, improvements to railways also benefit freight carriers and lower shipping costs means cheaper goods for consumers.