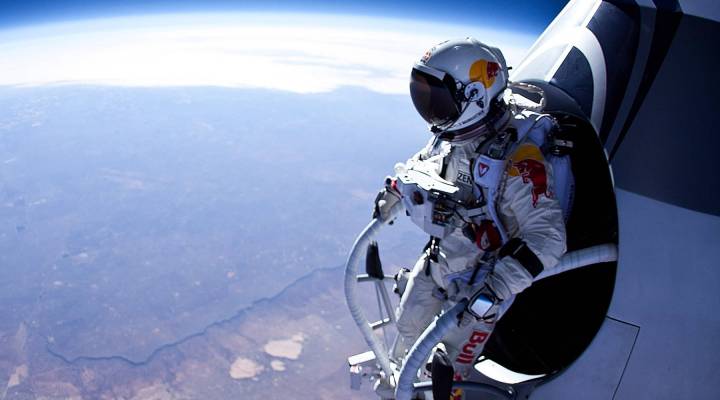 COPY
In this photo provided by Red Bull, Pilot Felix Baumgartner of Austria is seen before his jump during the first manned test flight for Red Bull Stratos on March 15, 2012 in Roswell, N.M. Jay Nemeth/Red Bull via Getty Images

In this photo provided by Red Bull, Pilot Felix Baumgartner of Austria is seen before his jump during the first manned test flight for Red Bull Stratos on March 15, 2012 in Roswell, N.M. Jay Nemeth/Red Bull via Getty Images
Listen Now

The 43-year-old will jump out of a capsule attached to a helium balloon 23 miles above Roswell, N.M. If all goes according to plan, Baumgartner will free fall for five minutes and exceed the speed of sound.  If that sounds insanely dangerous, it is. And Red Bull is sponsoring the entire event and will be live-streaming the jump on its website.

“Most mainstream brands wouldn’t touch an event like this with a 10 foot pole,” says Louis Foreman, CEO of Enventys, a marketing firm. “Red Bull’s a great fit. It’s really what their consumer enjoys seeing. It’s that live-on-the-edge lifestyle.”

Because most major brands won’t touch these events, Red Bull has a unique opportunity to make a positive impact on extreme sports, says Debra Kaye of Lucule.

And that will also resonate with Red Bull’s consumer, says Kaye. She points out Red Bull is collecting a lot of data from this jump that it says will be used for astronauts and future space tourists.

“At least it will have been in the name of trying something bleeding edge adventure,” says Frankel. “That’s still consistent with the Red Bull brand.”

There’s no word on how much Red Bull has paid to make Baumgartner’s skydive happen, but Frankel says the press it’s getting is worth a lot and estimates that for every dollar it’s spent, it’s getting at least 10 times that back in publicity. As bang for the buck goes, that is pretty extreme.

Streaming is causing headaches for networks