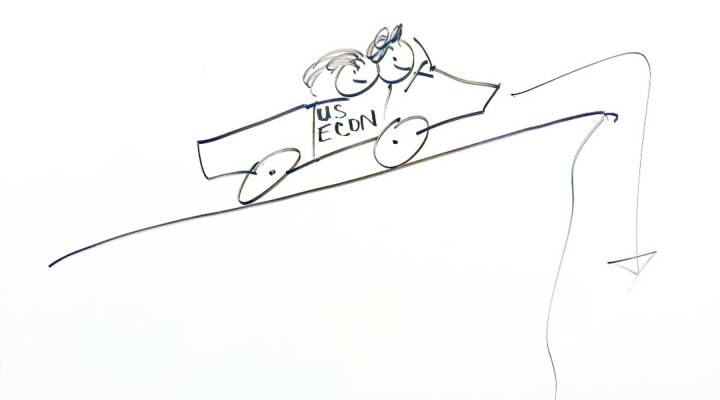 The fiscal cliff explained (with help from Hollywood)

You've heard warnings about the economic disaster that could happen if Congress fails to avoid a fiscal cliff. But what is the fiscal cliff anyway? Sr. Producer Paddy Hirsch enlists the support of his friends Thelma and Louise in this three-minute explanation. Marketplace
Marketplace Whiteboard®

The fiscal cliff explained (with help from Hollywood)

You've heard warnings about the economic disaster that could happen if Congress fails to avoid a fiscal cliff. But what is the fiscal cliff anyway? Sr. Producer Paddy Hirsch enlists the support of his friends Thelma and Louise in this three-minute explanation. Marketplace

Anyone not seen the movie “Thelma & Louise?”

Spoiler alert! There’s a key scene in the movie where the gals are driving dangerously fast towards the edge of a cliff.

So let me tell you about these two ladies. Thelma is a relatively wealthy woman who was a grateful beneficiary of the Bush tax cuts. Louise is a government servant —  she works in the Defense department.

The car is the economy — and like all cars, it needs to be maintained. It needs its oil changed once in a while, and it needs the brakes done.

Come December 31, a couple of things have been baked into the economic calendar. Right now, unless Congress pulls the cake out of the oven beofre year’s end, the Bush tax cuts will expire, and a whole bunch of government jobs — particularly in the Defense department — will be cut.

It’s a bit like Thelma and Louise running out of the money they need to change the oil and fix the brakes on their Mustang. The fear is those cuts will reduce consumer spending so much that instead of going up the slight incline we’re on right now, the economy will go right over a cliff. No matter how hard we stamp on the brakes.