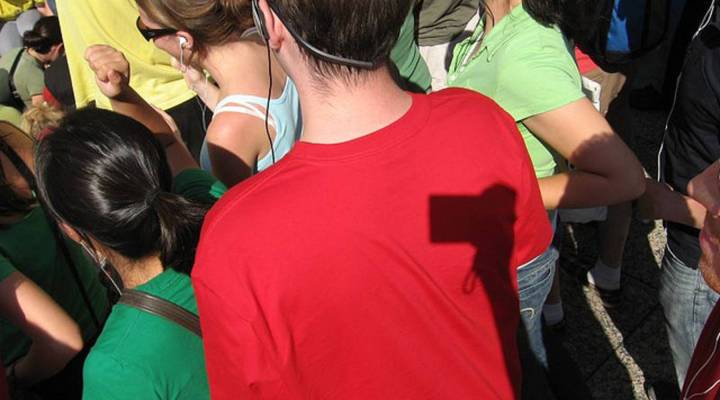 COPY
A herd of headphones proceeds down an escalator in California. m a r i s a/Flickr

A herd of headphones proceeds down an escalator in California. m a r i s a/Flickr
Listen Now

Music is a crucial way that we process the world around us, including the economy, according to Aram Sinnreich, a media professor at Rutgers University.

“Music has always been a method that people use to make sense of their environments and that societies use to develop a collective identity,” he says.

So, if we take a look at current hits, like the ubiquitous Call Me Maybe, what can that tell us about the economy? That we want to escape it, Sinnreich says.

“Those songs are classic bubble gum pop,” he observes. “It’s almost like the role that the movies played during the Great Depression.  Where people want to temporarily live in a world where you don’t have to worry about where the next rent check is going to come from.”

And part of us wants to live in a world where rent is but a distant dream, says Mark Richardson, editor in chief of Pitchfork, an online music magazine.  He says one trend we’re seeing is music that celebrates luxury and excess, like Watch the Throne, the hit album from Kanye West and Jay Z.  Songs on that album talk about credit limits that have no ceilings and buying couture in Paris.

“That album was very much about living an excessive lifestyle,” Richardson says.  “People kind of reveled in the fantasy of that.

Another recent trend influenced by the economy is the mainstreaming of electronica-style dance music, says Alexandra Smith, director of consumer trends at market research company, Mintel.  She points to bands like Skrillex, Lady Gaga and Robyn.

“It’s put-your-headphones-on, tune-the-world-out music,” she says.  “It tends to be really upbeat.  And it really makes sense, when times are tough, you’re going to want to turn to that type of music.”

So what about when times are good?  What do we listen to then?  Smith says we often gravitate toward more soulful, introspective music.  Take the spike in popularity of Emo music 10 years ago, or the singer songwriter boom during the prosperous late 1990s.

Smith points out the singer-songwriters seem to be making something of a comeback.  Coffee shop stapes like Alanis Morrissette, Cat Power, Ani DiFranco and Fiona Apple have all released albums this year, and they’ve done well.  Morrisette’s album debuted at number 5 on the Billboard charts.  Apple’s debuted at number 3.

“It does maybe suggest that we’re maybe ready to start listening to more thoughtful music again,” says Smith.  “And move away from the pure escapism.”

Smith says we may feel like the economy’s turning a corner. So we’re ready to stop shutting the world out and face the music.