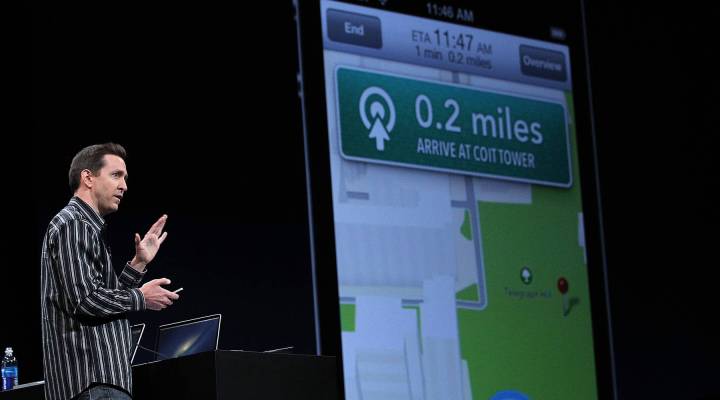 Kai Ryssdal: Have you noticed the smarter our phones get, the dumber we get? Phone numbers? C’mon, you probably only know a couple. The rest are… where? Right, they’re in your phone. Email addresses? Same thing. And directions? C’mon. Who needs to know how to get from point A to point B when Google Maps can show you the way?

Actually, that last part could start causing some problems for Apple.

Apple’s got its own map app instead.

Stacey Vanek Smith: I use Google Maps on my iPhone all the time: finding the best subway route to an interview; seeing how long it will take to walk somewhere; obsessively checking traffic on the way to the airport.  The map app has to work.

Rich Gerislovsky: It seemed as though it got confused a little bit at times.

Rich Gerislovsky is a tech columnist for Bloomberg news.  He recently tested the iPhone 5 and found Apple’s map app to be a little bit directionally-challenged.

Gerislovsky: I was driving south along the Embarcadero, which is the main road that runs right along San Francisco Bay, and the iPhone thought I was going northbound.

Apple maps also doesn’t offer any subway or bus information — at all. Rene Ritchie is the editor of iMore, an Apple news site.  He says for people who depend on those things…

Rene Ritchie: It could be almost deal-breakingly bad.

Why would Apple risk angering consumers? Why not just stick with Google Maps? Money.

Ritchie: Google was previously getting access to every iPhone users’ location data.  So now they control their own location  destiny.

Which means Apple can eventually sell ads to consumers based on where they are and where they’re headed.  In the meantime, customers might be irritated — but they’ll wait it out, predicts Van Baker, an Analyst with Gartner Inc.

Van Baker: They’ll probably give Apple the benefit of the doubt and say, ‘As long as they get it fixed within a reasonable amount of time, we’ll give them a little leeway.’

And Apple may not need much leeway, says Bloomberg news’ Rich Gerislovsky.

Gerislovsky: My guess is that Apple will throw resources at it. And the one thing we know about Apple is they have a lot of resources.

Now if they can just figure out which way is north.