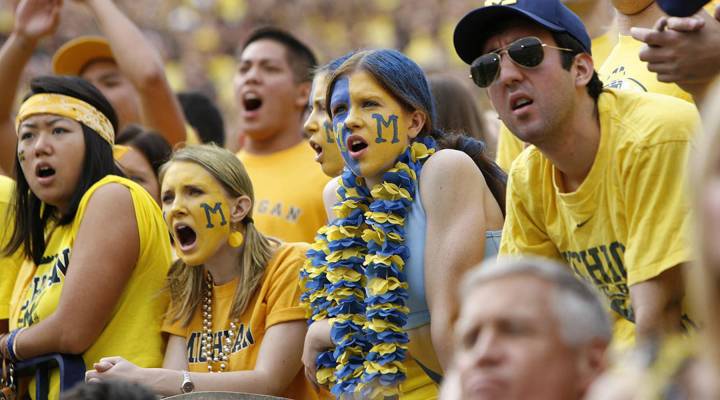 To a football fan with financial savvy

To a football fan with financial savvy

Tess Vigeland: Our little blue plastic friend has been on hiatus for a couple of weeks but he’s back, and heading to Ann Arbor, Mich.

It is college football season, which means Michiganders of the blue and maize persuasion are ever seeking great places for a tailgate party! Well Martin Vloet and his family recently came up with a way to supply such a place and make anywhere from $3,000-$4,000 in the deal — PER HOME GAME. Where is this magical place? In their new backyard and garage.

Martin Vloet: I bought the house a couple years ago and my wife and I knew going into that we were going to need to do some work on the garage as well as the house. And we decided to start from the back of the property. So we built a space that was going to give us a little bit of extra elbow room as the family got bigger.

As we started moving through on the project, I found through some of the people that I worked with and through some of my connections in town, that there was a lot of interest in a space like that, because it was so close to Michigan football. And if the space was something that might be available for use as a tailgate space, donors, corporations, a lot of people would be interested in coming in and using that space.

Vigeland: So how big is this space?

Vloet: The patio’s about 1,500 or 1,500-square-feet. The building itself has a footprint of about 620. So there’s about 600-square-feet on the ground floor and then on the upper floor.

Vigeland: And how much did you spend to convert this space?

Vloet: All told, best estimate for me is somewhere in the neighborhood of $80,000 over the last four years.

Vloet: We looked at it as an investment in the family. It’s family space. What we’ve essentially done is built something that’s almost as big as our house for $80,000. So that was money that was going to be spent, one way or the other. But when we were looking at trying to figure out what to charge for it, I looked around town and tried to find a comparable. If you’re selling something, you see what other people are selling the same product for. And there aren’t, unfortunately, very many places like this. We found one around the stadium, so I gave them a call. They told us we got everything booked this season, except once game. And this was month’s ago — they booked the whole thing now, as I understand it. And they were charging about $3,500 an event. And I looked at it and I thought, “That’s fantastic!”

Vigeland: And at this point, then you would be very much hoping that the Wolverines would do well. So a lot of people want to come and party before the game?

Vloet: Absolutely. Winning is your best marketing tool. If the team is winning, then there’s going to be more interest. But there’s always going to be interest. The team, in good times or bad, still generates interest and passion and a following. There are people who are on board no matter what. But if you win, then it’s a little bit easier.

Vigeland: Well, Martin, we like to hand out awards to people who have done some smart and perhaps creative things with their money. So you have won the Marketplace Money Piggy Award this week.

Vigeland: We’ll be shipping you a plastic pig.

Vloet: Oh man, that’s great. I’ll put it up in the space and make sure that when Sports Illustrated shows up for their party, they can see that. That’ll be nice. Thanks very much.

Vigeland: Martin tells us last weekend the Bosch Corporation rented out the space. And as he mentioned, Sports Illustrated will be doing so soon. Now piggy is well aware the whole place is populated with highly excitable Wolverines, not friendly confines for a pig. He’s counting on the Vloets to keep him safe from predators not to mention predatory lenders.