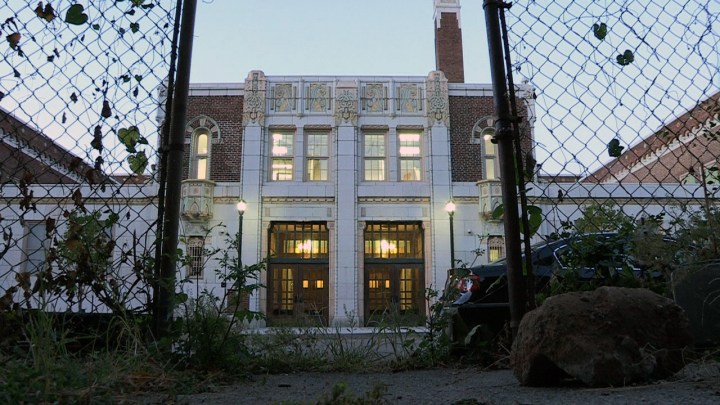 Leading the change at Oyler School

Leading the change at Oyler School

Just after dawn, Principal Craig Hockenberry stands outside Oyler School like a beacon in his lime green shirt and sky blue tie, greeting students as they line up to go inside. It’s the first day back at the old school after two years away. Oyler had moved up the hill a mile or so during a $21 million renovation.

“Today’s going to be crazy getting used to the new building, but we’ll get it,” he tells students. “Each day will get better and better, okay?”

The first day of school marks the end of a tough summer in a tough neighborhood. Just before the break, a fifth-grade student and her mother were stabbed to death. Then an Oyler parent was murdered right across the street from the school. White styrofoam cups still spell out his name — Brian — in the chain link fence. Hockenberry says during the two years the school was closed for renovation, the drugs and violence in Lower Price Hill got worse.

“I could walk you outside the door, not even 15 steps away, and I could probably get just about any drug that I want,” he says. “I could walk you another 15 feet down and there are our parents that are prostituting and are hooked on heroine and crack cocaine — parents that used to be on my PTA.”

Lower Price Hill is a small neighborhood of brick row houses overlooking the Ohio River. The culture is known as Urban Appalachian. When coal mining jobs in Kentucky and West Virginia dried up after World War II, many families came here for factory jobs. But those are mostly gone, too. Many get by on welfare and food stamps.

Donna Jones has lived here, off and on, her whole life. “Families that have been here a long time have married other families,” she says. Brian Thompson, the Oyler parent who was shot during the summer, was her son-in-law’s brother. “I consider us a close-knit community,” she says.

Oyler School — with its long history and imposing brick and terra cotta architecture — looms large in that community. Jones went there. So did her kids, and now grandkids. “It’s more than a school,” she says. “It’s like the hub of activity.”

That is no accident. Oyler is what’s known as a community learning center. It’s part of a growing movement in education that says if you’re going help poor kids succeed in school, you have to fight the effects of poverty. Oyler’s teamed up with nonprofits and government agencies to put in a health center and a vision clinic on campus. The school is open from early morning until late at night. Kids can eat breakfast, lunch and dinner there and take home food on weekends.

The rehab created more space for all these services, and added air conditioning and real lab equipment and whiteboards*. With a new daycare and preschool, Hockenberry says Oyler now serves kids from age six weeks to 22. “In theory there should be no kid, no child or anybody in our community not getting full services here,” he says.

Academically, he says, all the services are making a difference. Test scores are slowly improving, but the school has a long way to go. This year Hockenberry has another goal. “I want to start working on the neighborhood,” he says. He wants the boards to start coming down off the houses, and the drug dealers to leave. “I want people to come and see this as a great school in a great neighborhood,” he says.

So, after school, he walks the streets. Still wearing his suit and tie, Hockenberry greets parents smoking on their front stoops, and hassles kids he didn’t see in the halls that day. Hockenberry is a baby-faced 40-year-old. The former teacher stumbled into a job at Oyler in his mid-20s and got hooked on the challenge of turning it around. He lives nearby in Price Hill and knows pretty much everybody around here by name.

He spots a lanky young man in a glittery red tee shirt across the street. “Roy, what’s up with it? Are you staying out of trouble?” Roy Lee has not been staying out of trouble. He’s picked up a drug charge. Lee is 24 years old and dropped out years ago. Hockenberry pushes him to come back and finish at Oyler’s online high school. “Your grandma would be so proud of you, man,” he says. “You did her wrong for so long.”

Lee promises to stop by the next morning at nine o’clock. Hockenberry finishes his rounds. “I really want Roy to go back to school,” he says. “I’ll find out if he’s good for his word tomorrow.” With that, he walks off to kick some older kids off the preschool playground. An ice cream truck rolls by —  a reminder of the waning summer.

The next day, Roy Lee doesn’t show. But a few days later, he does.

*CORRECTION: An earlier version of this story incorrectly described the whiteboards in the renovated classrooms. The text has been corrected.